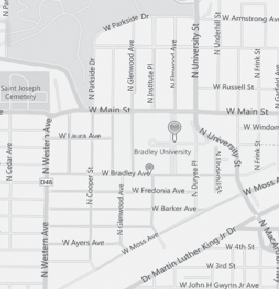 A resolution proposing an of increase lighting and safety to streets of off-campus residences was unanimously passed during Student Senate’s general assembly meeting on Monday.

“I’m really just happy to have gotten this piece of legislation passed,” said Allemen. “It just goes to show that any student can make a difference on this campus, whether they a first year student, or a senior with one foot out the door.  Also I believe through all of the work Justin and I have done, whether it be working with members of the city government or the neighborhood associations, will help foster a better relationship between student body and the residents of Peoria.

Together, Allemen and Reeg agreed that not only should lighting be improved, but emergency safety posts should installed on several streets located South of campus.

Together they drafted the resolution of locations they would like to see both emergency safety posts and an increased amount of lighting. The resolution recommends that a committee, consisting of members of the student body, the administration, the Moss-Bradley Residential Association, the Bradley University Police Department and the City of Peoria be composed in order to determine the feasibility of improving safety on off-campus streets.

As part of the resolution, it is suggested “that the commission has a tangible plan to implement these actions by December 31, 2012.”

“They’re going to look at a lot of factors,” said Alleman during Monday’s general assembly meeting. “They’re the experts and they are the ones with the equipment and tools they need, we’re just giving them an outline to work with, it’s up to them to accept it and look into it.”

As far as funding the project, Reeg said during Monday’s general assembly meeting that lighting would be taken care of by the city of Peoria, but the emergency safety poles would most likely be a financial responsibility of the university.”

“The cost of the [emergency] light posts will most likely be from Bradley,” he said. “But if we can put turnstiles in the library for safety they can probably afford light posts.”

As stated in the resolution: “Bradley University is a large stakeholder in the surrounding off-campus community . . . and is located in a an urban area where the city’s crime index (448.6) is significantly higher than the national average (319.1) as of 2010, according to data provided by the city of Peoria.”

“There have been longtime concerns that off-campus lighting has been insufficient, especially from a safety perspective,” said Reeg in last week’s article “Senate aims to improve off-campus safety, lighting.” ” I think that this project can have a significant impact on helping to deter crime that could take place in the future.”