Yes, Bradley, there’s an app for that.

At the Jan. 24 Late Night BU, Student Senate released the Brave Life app to the student body as the free, unofficial app of the uni- versity.

“[Student Body President] Zack Shaw and the cabinet wanted a mobile way for senators to sub- mit their constituency reports,” Pericak said. “[Clark] and I started out by making a Google

Form for the senators but decided we were going to do more with it so it could be used by all of campus.” 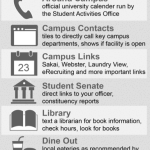 In November 2013, the two freshmen began the app-building process. Pericak said he did most of the brainstorming and “people work” while Clark wrote most of the code.

“It was a lot of late nights using the coding knowledge we had and looking the rest up on Google and YouTube,” Pericak said. “I would think of something we could add, I’d go next door and get

[Clark] and we’d sit down and start working on it right away.” Pericak, vice president of Technology Services for Student Senate, said his department was able to fund the app, saving a lot of time and money.

“Currently, Bradley is one of the only universities I’ve seen that has a 100 percent student-created and student-run app,” Pericak said. “Other schools pay thousands of dollars to have professionals do it. We paid about one tenth of the price and, since it is web-based, we can update the app instantly instead of waiting 10 days like Apple apps.”

Clark and Pericak said that although their major is rigorous and time-consuming, they were- able to succeed in this project.

“Bradley allows us to do this kind of thing,” Clark said. “It is a big opportunity.”

Pericak and Clark said University President Joanne Glasser talked to the freshmen class in their first days at Bradley and told them their years at Bradley are a time to be a renaissance fig- ure and make a difference.

“We wanted to make something that leaves an impact on campus,” Pericak said. “We want this to be a student resource.”

With more than 625 downloads already, Pericak and Clark are aiming for 1000 downloads by the end of the spring 2014 semester.

To download the free app available to smart phones, search “Brave Life” in the Apple App Store or the Google Play Store.