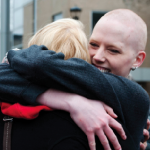 More than 60 students braved the unseasonably cold weather the afternoon of April 12 for one goal: go bald.

While dozens of men participated, it was women who made a statement this year. 11 females had their heads shaved, the highest number of women to participate in the Bradley event.

“It’s awesome,” PIKE member and senior business-economics major Stephen Bannon said. “It shows that a lot of sorority girls who [shaved their heads] last year are accepted at Bradley and won’t be ridiculed, so their friends decide to do it this year,”

Sophomore psychology major Megan Fogler said she wanted to shave her head in honor of several friends and family, including her two grandparents, a friend from high school and her boss’ wife, all of whom had or have cancer.

“It’s a relevant issue for me, so I wanted to raise awareness,” she said. “It feels fantastic. I’ve been waiting for this day since January.”

Another female participant said she was nervous to shave her head despite months of planning, but said this event gave her extra motivation.

“I’m happy to raise money for a good cause like St. Baldricks,” sophomore hospitality leadership major Madison Kamp said. “[My head] feels good. It feels soft. But I’m so used to pushing my hair back for photos.”

Kamp alone raised more than $3,000 for the St. Baldrick’s Foundation.

PIKE member and freshman finance major Michael Hindel said most of the men in his fraternity go bald for the yearly event but the high number of women was the showcase this year.

“It’s a really big thing that all these girls are volunteering,” he said. “They’re the ones who make the event great.”

University President Joanne Glasser spoke at the event before the participants lined up for haircuts. Glasser has been diagnosed with breast cancer in December 2008 and again in December 2011. Glasser is now in remission.

“This is an event I look forward to each and every day because [cancer is] something we can fight,” she said. “I’m here to cheer you on as many of you go bald.”

Despite the increased number of female volunteers, Bannon said it was the fundraising effort of all the participants that made a difference.

“When women participate it’s a more powerful message than [when men do it], but it’s still important for everyone,” he said. “We want to break down the barrier between being bald and having cancer.”

As of the day of the event, the sum of all Bradley participants exceeded the goal of $25,000 by raising more than $27,000 for St. Baldrick’s. PIKE made the largest contribution, raising about $13,200.