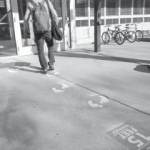 Move your butts 15 feet away.

That’s what Social Norming (SONOR) wants you to do with your cigarette butts.

SONOR, a student organization committed to promoting positive social norms about alcohol and tobacco use, is reminding smokers to move away from entrances on campus as part of its annual campaign.

“SONOR decided to spray the 15 feet signs as a part of our yearly campaign to promote the Illinois state law (The Smoke Free Illinois Act) that says all smokers must stand at least 15 feet from any building entrance,” said SONOR President Sam Shafer.

The Smoke Free Illinois Act became effective in 2008, prohibiting smoking in most public places and smoking within 15 feet of building entrances, windows, and ventilation intakes. The Bradley Student Handbook directly references the act and its requirements, specifically the 15-foot requirement, under the “Non-Smoking Policy” headline.

High traffic areas on campus, such as the Markin Family Recreation Center, Michel Student Center and residence halls, are the focus of the SONOR campaign.

“We had heard complaints from students who actually said they were getting annoyed with faculty and staff smoking in the entrances to buildings,” Shafer said.

The campaign has already yielded much feedback, despite the effort beginning less than two weeks ago on March 28.

“People have told me they find the spray chalk visually appealing and a good reminder of the 15-foot Illinois state law,” said Interim Director of Wellness and SONOR advisor Lyndsey Hawkins.

Hawkins said based on annual campus-wide surveys, most recently the 2012 CORE Institute’s Alcohol and Drug Survey, fewer Bradley students smoke in comparison to other university averages.

Despite the comparatively low number of regular smokers on Bradley’s campus, some students have noticed a shift in behavior of smokers since the campaign began.

“I like the campaign because it reinforces the law and the smokers are not right by the doors anymore,” said freshman industrial engineering major Julie Jaskierski. “I don’t think it will be 100 percent effective, but I have already noticed some people standing outside the area.”

Such remarks are rewarding for SONOR members and make them glad they can provide such a service, Shafer said.

“[As] we were spraying outside of Williams Hall, a student approached us and said thank you for doing this because he found it annoying to walk outside and be ambushed by smoke,” he said.