Sororities take back the night 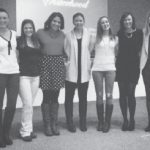 Over the course of their presidencies, the 2013-2014 school year sorority presidents all dealt with at least one situation of sexual assault affecting at least one of their chapter members.

They decided to take a stand and to take back the night.

Take Back the Night, a Women’s Week campaign hosted by Bradley’s Panhellenic Council (PHC), is an international foundation that encourages women to speak out against sexual violence.

According to former Gamma Phi Beta president and current PHC President Event Liz Steinhaus, “the Panhellenic community aims to raise awareness of sexual assault and violence against women” on the Bradley campus.

This is the first ever Take Back the Night Women’s Week that the Panhellenic community hosted hosting. Former Chi Omega President Lindsey Burke presented the idea to PHC, and during the past few months, the former presidents of each sorority have collaborated to plan the three days of events, which began Wednesday and spanned through March 7.

Men on campus can participate in Women’s Week by taking the initiative to pledge against women’s violence and sexual assault through the White Ribbon Campaign.

During the first event on Wednesday, motivational speaker Erin Foley gave a lecture in Neumiller Hall called “Empowering the Sisterhood.” Her lecture covered the development of female students, as well as building confidence within women throughout campus.

BUPD hosted the second event, a self-defense class, in the Markin Performance Court Thursday night. The event included a hands-on experience and was available to females only.

The final event, available to all students, is a candlelight vigil the evening of March 7. Julie Boland, a member of the Panhellenic Council will give a brief motivational speech, and the women of the Council will lead the vigil on a walk throughout campus.

Hot chocolate will be served to attendees at the end of the walk. Bradley Health Services and counselors will also be available to students for any questions or provide any needed support. This event begins at 6 p.m. on Olin Quad.

“Although this event is hosted by the Greek community, it is open to all students,” Steinhaus said. “We want campus-wide participation in this event, because this issue is not specific towards any groups or organizations.”