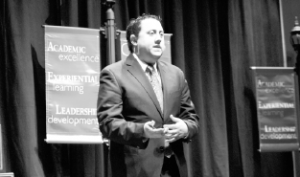 As Bradley’s drive to become a university of national distinction continues, one group is among those leading the effort by doing what they do best: speaking.

“This is national distinction at its finest,” Department of Communications Chair Paul Gullifor said. “NPR is distributed nationally to millions of listeners and known for its high quality programming.”

“[The team’s legacy] gives you a responsibility to uphold how you do this activity correctly, honestly and humbly,” Cochran said on NPR.

Young acknowledged that publicity, like being featured on NPR, can draw high school students who hope to contribute to continuing the legacy of success to Bradley.

“When students are deciding where to attend college, knowing that Bradley has the legacy of training the best communicators in the nation is a huge draw,” Young said.

Cochran wasn’t the only competitor to see airtime on the radio. Junior theater arts major and national champion Kaybee Brown went on WBEZ 91.5 Chicago with Tony Sarabia on Wednesday to talk about a very different speech topic: himself.

“I love attention garnered from [performing my speeches], but this was a little different,” Brown said. “I was able to speak as myself.”

Brown said the interview had a rough start because he has a speech impediment.

“In the beginning I was stuttering all over the place,” Brown said. “I was explaining what I did with one of my events and was getting confused. While correcting myself I lost some control.”

Being a speaker and having a speech impediment isn’t easy, but Brown said he doesn’t let it hold him back.

“All it means is I have to double, and sometimes triple, my work ethic to appear as if I don’t have one,” Brown said.

But in light of all of the struggle Brown has faced as a speaker, he said the interview turned out OK.

“They edited some of [the interview] out, because I wasn’t making sense,” Brown said. “I looked over at my [coach] Ken Young a couple of times and he sent me nonverbal support, as well as the energy to get me through it.”

With the team bringing its national title count to 41 by winning the 2013 National Forensic Association Championship in West Virginia over the weekend, the legacy continues.

Despite the recent publicity regarding the speech team’s success, Cochran said the publicity is not the height nor end for the team.

“This team may be receiving a lot of attention having won four consecutive titles, but we are the farthest from complacent and satisfied,” Cochran said. “The hunger has been passed down through the ages and will continue for as long as this team does.”