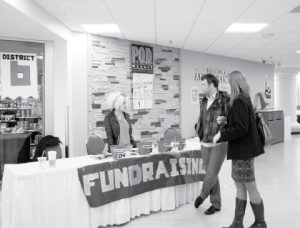 This year marks the 65th annual Bradley University Norton Speech Invitational, and the odds happen to be in the Peoria Area Food Bank’s favor.

The Bradley Speech Team held the tournament last weekend, hosting more than 700 students, coaches and alumni from 47 competing schools. This is the second year the speech team has organized a fundraiser to coincide with the tournament, and team member AJ Curry said $2,787 was raised for the food bank.

“I could not be happier with how well [the fundraiser] went,” Curry said. “To be able to raise more than $2,000 in two days is phenomenal. Not only did we double the amount of money we raised last year, but the Bradley Speech Team got the opportunity to give back to our community.”

Each year, the speech team picks a theme for the annual invitational, and this year they decided on the Hunger Games. The tournament has been dubbed the “Norton Games” in honor of Dr. L.E. Norton, former director of forensics and chairperson for the Department of Communications. The team first hosted the L.E. Norton Invitational in 1947.

“The food bank was a fitting choice because the theme of this year’s tournament was a spin-off of the Hunger Games,” said Ken Young, current Director of Forensics. “The team sought to raise about $250 for the food bank, but the overwhelming desire to keep representative tributes ‘alive’ via donations resulted in the speech team raising more than 10 times the initial goal.”

To fit the theme, the schools were divided into different circuits, or “districts,” based on region. Each district then elected a representative, or a “tribute”, to participate in the Norton Games. Tributes were kept “alive” through donations. The last two tributes alive, based on who had the most amount of donations, battled it out in costumes, running around campus and asking for last-minute donations.

Flags with a specific circuits’ number could be bought for $1, or a Mockingjay pin, a popular symbol in the Hunger Games books, for $3.

Western Kentucky University, Tallahassee Community College and North Central College were all winners of the speech tournament aspect of the invitational.

Curry said because Bradley hosts the large tournament, all team members had to help manage the event and could not compete.

“The team and our fantastic coaches helped the entire event run smoothly, and both the Bradley team, as well as all the competitors, coaches, judges and alumni had a great time,” she said.

Young said he is proud of the team’s effort.

“I am very pleased with the fundraising done by the team for the Peoria Food Bank,” he said. “Much like everything this team does, the students want to exceed expectations and be the best.”

Despite not competing, Curry said the team made an impact with the fundraiser.

“Speech is an activity which focuses on making a difference with the power of our words,” she said. “Every week we advocate for change and speak for those who can’t speak for themselves. So when we get the opportunity to make a difference and help those who need it, we take advantage of it, and we hope to continue to do so for a long, long time”