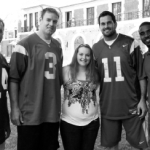 One minute she was learning how to conduct an interview as a sports communication major, the next she was delivering Matt Leinhart his birthday cake and asking Robert “RG3” Griffin III how his day was going.

Sophomore sports communication major Megan Gorecki was given the opportunity of a lifetime when she spontaneously entered the Nissan Heisman House Twitter competition and won.

“All you had to do was tweet the hashtag #NissanHeismanHouse,” Gorecki said. “I honestly forgot I tweeted it, so when they contacted me about three or four weeks later I was confused. “

Gorecki said she received a direct message on her Twitter account from ESPN Promotions notifying her that she had won the contest. She said that she thought the message was spam but decided to provide her “junk email address” anyway.

“About a week later, I received an email from a company saying that I had won this prize worth a certain value, and I had to do all these steps in order to claim my prize,” Gorecki said.

Thinking that it was a scam, Gorecki ignored the emails until she received one final note.

“[They told me] I had three days to respond until they found another winner,” she said.

Gorecki and her dad sat down to look into the authenticity of the email source and found that the outsourced promotional company for ESPN was, in fact, the one sending her emails.

After all the paperwork and “nitty gritty details,” Gorecki flew out to Pasadena, Calif. from May 10 to 12, 2013. She shot the scenes and participated in the commercial that aired in January 2014.

This contest was the final commercial of the Nissan Heisman House aired during the Rose Bowl. Gorecki was all dolled up and donned a tiara and yellow ball gown while acting alongside some of the sport’s biggest names.

Gorecki said the first of her two-day experience was consumed with hours of shooting the commercial. At the day’s end, ESPN told her that her commercial shoot was complete, but her homework was not.

The entire second day consisted of sports interviews, “hanging out with the guys” and watching top NCAA and NFL athletes throw footballs and act out skits for the commercial. She even played Madden with some of the players.

“They found out that I was an aspiring sports reporter and told me to prepare questions for each of the athletes that would be there tomorrow,” Gorecki said. “They were going to let me do interviews.”

Gorecki said the opportunity to be in the environment she one day hopes to return to was above and beyond a memorable experience.

“I’m far from a TV star, but it was definitely weird at first to see myself on TV,” she said.

To watch Gorecki’s commercial debut, visit NissanHeismanHouse.com and click on the “Pageantry” video.