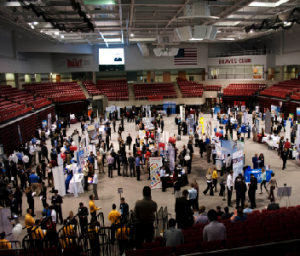 Twenty-two new employers joined students and returning employers at this year’s Spring Job and Internship Fair Wednesday at the Renaissance Coliseum, bringing the total number of employers to 110.

“[Around 100 employers is] usually what we expect with a career fair, so we’re really pleased with the numbers, especially since we had such a large fall fair,” said Executive Director of the Smith Career Center Jane Linnenburger.

More than 800 students attended the fair, and many said they felt prepared when they arrived.

“This was my first job fair, and I was nervous before. But it’s a very laid back environment,” said junior English major Carmen Klopfsenstein. “I was able to just look around and talk to employers.”

Alumni, both in the form of job seekers and recruiters, were also at the Coliseum. According to Linnenburger, more than a third of the recruiters were Bradley graduates, and she said they and other employers spoke highly of Bradley students across the board.

“We received many comments about how well our students were prepared and that they did a great job of conveying their interests and qualifications for the positions that were available,” she said.

“I was fortunate enough to find opportunities [last year], but I found myself in between jobs and decided to look here,” Francis said. “[Even though it was my first fair], it was easy to sort through the employers and find opportunities. I think I found some good fits for me.”

Recruiter Bob Fricke from MSTN said it was a great first impression of Bradley for his company.

“The food is great, the conditions are great and the caliber of students is fantastic,” Fricke said. “We’ve gotten multiple applications already. It’s nice to have so many qualified people show up. We’re very impressed.”

Weedman’s Customer Service Representative Kayla Portwood said it was the company’s first year at the job fair as well, and she said the experience went well.

“It’s a great environment; everyone has been nice and inviting. The event was extremely well-organized,” she said. “Even though not many students know us, I have a great feeling about the ones I’ve talked to today.”

Employer veteran Power 92.3 said the company has thoroughly enjoyed hiring Bradley students throughout the years they have attended the fair.

“I think we’ve been here every year,” said Promotions Video Assistant Evan Ford. “Our promotion director is a Bradley alum, so we know we like the broadcasting program that [students] learn here,”

Ford said he was impressed by Bradley students.

“I feel very good about the students I’ve met here today,” he said. “I’ve made some strong contacts, and I’m happy with the turnout.”

Many students said they knew what to expect before they arrived. Junior marketing and professional selling major Victoria Haan said she had been to one before, but this was her first year actively attending the fair.

“I walked through the job fair freshman and sophomore year, but this is the first year I was looking for an internship,” she said. “I thought it was a really friendly environment.”