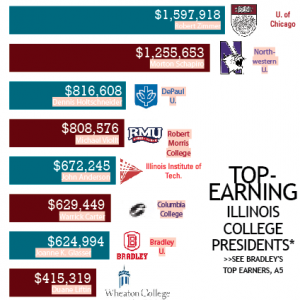 University President Joanne Glasser’s base salary remained virtually the same between the 2009 and 2010 tax report years.

The president’s base pay, however, remained steady.

Part of the benefits the president receives, as listed on the form, are a personal residence, personal services and club dues. Covering those expenses is commonly included at other universities.

Keith Alm is Vice Chairman for the Board of Directors and Chairman of the Compensation Committee. He said the committee assesses top administrators’ compensations.

“I lead a committee of six independent directors who…[ensure] the salaries are competitive and reflect the performance of each individual, including the president,” he said. “This outcome is the result of several months of work and is one of the most serious fiduciary responsibilities of the board.”