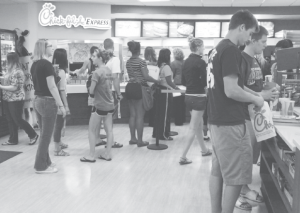 The controversy of Chick-fil-A’s recent opening on campus also brought something else new to Bradley – a new student organization countering the restaurant.

Bradley Respects and Values Everyone (BRAVE) was started by a group of students after Chick-fil-A, and CEO Dan Cathy, made national headlines this summer. Cathy made statements opposing gay marriage and rights, but reports also came out that the CEO was using Chick-fil-A profits to donate to anti-Lesbian, Gay, Bisexual and Transgender (LGBT) charities.

“The issue is that [Chick-fil-A] actively donates millions of dollars to radical groups that have a documented history of discrimination against and intolerance of the LGBT community,” BRAVE advisor Melissa Sage-Bollenbach said. “The groups have called for the criminalization, reparation and/or execution of LGBT individuals.  Through their relationship with Chick-fil-A, Bradley University is indirectly funding these groups.”

BRAVE President Ricky Hawkins said the group wants to raise awareness about Chick-fil-A’s donations to hate groups, and how this will affect LGBT students on campus.

“We’ve talked to the administration before, but we want them to acknowledge Chick-fil-A’s message and its donations to these [anti-gay] charities,” Hawkins said. “So far [the administration] says it’s a free speech issue but they don’t acknowledge that money is going to hate groups.”

BRAVE recently launched a website to educate students and raise awareness about the group’s goals. After just two days, more than 40 students signed the online pledge against eating at Chick-fil-A.

“I expect that number to increase,” Hawkins said. “We had an information table at the Zach Wahls lecture [Sept. 26] and we’re planning on having a table at Parents’ Weekend to not only push out information about BRAVE but about Chick-fil-A, too.”

BRAVE member Andrew Gillen said he got involved because of high school friends who were bullied for their sexual orientation.

“The hatred and social difficulties [LGBT people] face are completely uncalled for and downright cruel,” he said. “I feel as though it is socially irresponsible for Bradley to do business with a company that donates money to anti-LGBT organizations such as Chick-fil-A when we claim to be a non-discriminatory university.”

Hawkins said having Chick-fil-A on campus goes against the university’s standards.

“We’re trying to uphold Bradley’s values to have respect for all people,” he said. “But with Chick-fil-A on Bradley’s campus [and students buying food from there] it is counterintuitive to Bradley’s message.”

In fact, raising awareness about Chick-fil-A and advocating for LGBT students is only the first goal for BRAVE. Sage-Bollenbach said BRAVE hopes to stand up for all students facing discrimination.

“The main goal of BRAVE is to ensure that students are treated with respect and dignity,” she said. “Specifically, that no student feels discriminated against due to age, color, disability, ethnicity, gender, sexual orientation, race or religion.”

“I know our student body is far more than capable of making change happen on this campus, and if they speak out against the hatred I have no doubt that we will be successful,” he said.

Even though Chick-fil-A is the hot topic now, Hawkins said the organization will support any student group.

“We hope everyone understands that we care about all students here,” he said. “We’re going to fight for everyone regardless of the situation. Once we see an issue at hand, we’ll pledge to the student and become a voice for them.”