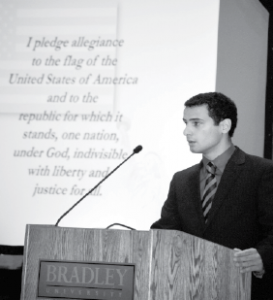 Bradley had the unique opportunity to participate in American history last Friday.

Dingledine Concert Hall and Bradley hosted a Northern Illinois Naturalization Ceremony where 90 candidates, including one Bradley student, were officially made citizens of the United States.

“In a world full of conflict… 90 of you from 31 different countries wish to uphold the American ideals,” said Chief Judge James Shadid in his opening remarks. “That is not only a tribute to you and your integrity but to your families’ sacrifices to get you here.”

Magistrate John Gorman administered the Oath of Allegiance, officiating the naturalization of 90 men and women. The oath was followed by a congratulatory and welcoming video from President Barack Obama.

David Glassman, Provost and Vice President of Academic Affairs, then welcomed the new citizens to Bradley’s campus. He spoke of freedom and honor before aiding in the introduction of junior civil engineering major Onsel Badur.

“It is a bit of a shock to be at my own university for my naturalization,” said Badur as he began his speech. “I mean, what are the odds of that? But I guess that’s just how my life’s been going for the last five years.”

Badur and his brother Onder traveled to Illinois from Turkey five years ago. Their family was only able to support the brothers’ journey to the states, but with help from Bradley and the United States, they enrolled both brothers in college in Illinois until they were able to become full citizens.

“America was nothing but good to my family during this process,” said Badur.

Badur and twelve of his Theta Chi fraternity brothers led everyone in attendance in the Pledge of Allegiance before various political representatives extended their congratulations to the newly formed citizens. State of Illinois Senator David Koehler was the first to speak, and he was openly inspired by the varied crowd before him.

“Diversity with a common purpose has and will continue to strengthen our nation,” he said.

A number of various other representatives, including one for the Peoria Daughters of the American Revolution and the Post Commander of the American Legion, also gave congratulatory remarks and spoke of their ancestors’ journeys to America and how it shaped their lives today.

“Your choice to become a citizen of this nation will not only affect you but your children and, in my case, your grandchildren,” said Chief Judge Shadid. “Immigration has renewed and strengthened this country for over two centuries. While your stories will always be your own, you are part of a larger story now: the American story.”

Badur said he shared the Chief Judge’s sentiments on immigration.

“My story, our story, is the story of this nation,” he said.