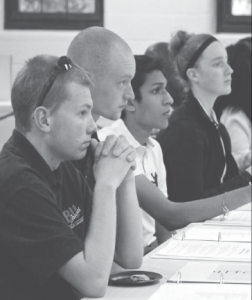 Student Senate is looking to expand their network outside of the Bradley bubble.

At the first Senate meeting of the semester on Monday, an amendment to the constitution was brought to the floor proposing greater student involvement at the Peoria City Council meetings.

The proposed legislation requires the City and Local Affairs committee to actively attend bi-weekly meetings of the Peoria City Council.

Chairman of the CLA committee, William Parkhurst, who proposed the amendment stated in the proposal that by attending city council meetings, senate would have more participatory role in Peoria’s government.

The proposal also stated it would be one way to reach out to the community.

“If a Bradley senator is consistently attending these meetings, it will prove we are serious about having a professional relationship with the council,” said Campus Affairs chair, Holly Alguire.

Although she agreed with the proposal, Alguire said she believed attending bi-weekly meetings should be mandatory, rather than having the option to watch online.

Parkhurst stated that because Bradley students are unable to vote on matters presented at the meetings, a student that attends the meetings would have limited influence on discussion and it wouldn’t be necessary to physically attend.

“We already communicate well enough with individual congressmen in the Peoria area,” Parkhurst said. “I don’t think it’s necessary to be another anonymous member at local meetings.”

In addition to proposing a new amendment, eighteen new senators were approved to join senate and were officially welcomed by Vice President for Student Affairs Alan Galsky.

Senators will have the chance to propose changes to the amendment as well as vote during the next general assembly.