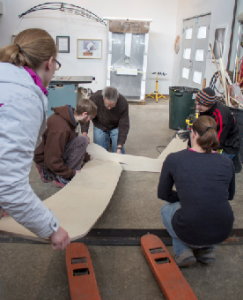 A recent installation flew into the Global Communications Center and Heuser Hall on Tuesday, as a result of the collaboration between a Bradley alumnus and seven students.

Bob Emser, MFA ’78, opened his Eureka art studio to four undergraduate and three graduate students for the “Public Art Project” class, where students had the opportunity to learn how a professional artist works, over the course of four Saturdays. The students assisted Emser in creating the four pieces, three of which now hang in the GCC and one in Heuser.

“The planes are part of Bob’s new body of work that relate back to the model airplanes he assembled when he was a child,” said graduate ceramics student Kari Thornton.

Emser is a distinguished sculptor with 25 years of experience. He was the youngest sculptor selected for the Illinois Arts Councils Sculpture Exhibition. Emser has taught at several universities and founded of the Contemporary Art Center of Peoria, a non-profit gallery near the riverfront.

Senior interactive media major Nick Trompeter said he was unsure of how the four classes would turn out due to so many hands working on the same project.

“Bob did a great job teaching us how he would tackle a portion of the project, then having us split up the work to create multiple planes simultaneously,” he said. “Bob had a lot of tricks up his sleeve when it came to knowing easy solutions to specific problems.”

Despite the fact that students had to wake up early on Saturday mornings for class, senior painting major Thea Baldwin said it was worth it.

“It was a laid back environment, and it was really cool to work under a professional artist and hear about his experiences and his advice for us,” she said. “He had a lot of crazy stories about teaching, art installations, openings and some of his past projects.”

Most artists typically work by themselves, said graduate photography student Sydney Wlodyka, but Emser welcomed the students into his studio to become part of the process.

“We all were encouraged to give our input and play off of our strengths,” she said.

The students were involved with every step of building the planes, including physically hanging the installations themselves.

“Sometimes the only thing keeping the planes from falling was someone’s body weight standing on the hanging wire, which is not a comfortable feeling,” Baldwin said. “But the finished product looks awesome and definitely adds a little more interest to the GCC [and Heuser].”

Graduate sculpture student Alicia Conway said the chance to work with a professional was vital.

“Hands-on experience is valuable to any student, and this unique opportunity will be beneficial in more aspects than each student may understand,” she said. “As an alumnus of Bradley, Bob provided knowledge of the ways the department of art has grown and flourished over the years.”