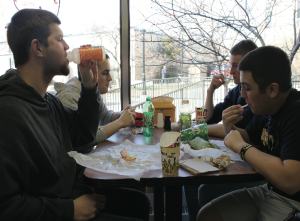 Center Court is now an option for hungry students during the weekend.

In response to a demand for more late night food service, Director of Campus Dining Services Ron Gibson said Center Court will be open on the weekends.

“This was a request from several students on senate,” he said. “So we wanted to try this out and see if this  would be a benefit to the students on the weekends.”

“The primary purpose and responsibility of Student Senate is to realize and address the needs of the student body,” he said. “With that in mind, I started out looking for a project for the semester. I started asking around campus and it became apparent that the campus was in need of food service past the normal hours of operation.”

“As we all know everyone has a boss, so this was not the decision of merely one person, but the combined efforts of Student Senate, food services and of course the university administration,” Cason said. “Once the need was realized it warranted establishing a basis for wanting to extend the hours through the weekend.”

Overall students are pleased with the new hours.

“On weekends, especially at night, students are looking for something to eat, and now students have somewhere on campus to go,” junior television arts major Laura O’Radnik said. “Being able to stay on campus is a safer alter- native than having to go off campus.”

John Medwick, a sopho- more game design major, said he agreed that opening Center Court to the weekends is a great idea.

“I think it’s a good idea because it gives people an alter- nate [place] other than Bacci’s to get good food if they’re hanging out,” he said. “Plus at night on the weekend its better to stay on campus.” Senior Management and Administration major Jacob Karpowicz said it was crowded when he visited Center Court this past weekend.