Students get another shot at NBC olympic internship 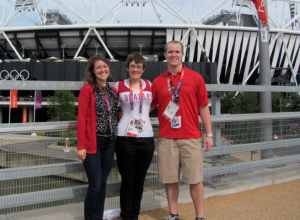 The 2012 Summer Olympic Games may be over, but that doesn’t mean the torch is out yet for Bradley.

After 10 students interned for NBC in New York or London during the games this summer, Bradley has once again been called upon, this time to help broadcast the 2014 Winter Olympic Games in Sochi, Russia.

“This is a tribute to the 10 students who participated in the Summer Games,” said Paul Gullifor, chairperson of the Department of Communications.  “I talked to NBC about a week after the [London Games] finished, and they said our interns were fantastic. They said they wanted more Bradley students for the Winter Games.”

Gullifor said he anticipates students having similar internship positions as those who participated in the 2012 London Games, as runners (who ran basic errands), production assistants (who assisted the producers for certain events) and loggers (who logged important calls for future highlight reels).

“I think students will do very similar things [as the interns did from 2012 Games],” he said. “The students will probably be split between Russia and New York too. Perhaps they’ll be in Stanford, Connecticut, though, since NBC is moving its sports division from New York to there.”

The Winter Games will be hosted from Feb. 7 – 23, 2014, meaning potential interns will need to miss a few weeks of classes while they’re away.

“We’re discussing a lot of models for the students missing class,” Gullifor said. “We’re coming up with online courses, or ways the faculty can work with students online. I’m confident we will find a solution to this, and the interns can go without any penalties that would delay graduation.”

Gullifor said he’s optimistic that a possible decrease in the amount of interns for 2014 won’t affect Bradley students’ chances.

“[NBC] said they hired too many interns overall [for the Summer Games] and will reduce that number for Russia, but they were so impressed with our students,” he said. “I think we’ll send at least 10 students again. NBC will cut out [the number of interns] from other schools, but not Bradley.”

The reasoning behind this is due to the initial 10 interns’ work for the London Olympics, Gullifor said.

“This is a validation of the students and the skills they have and the concepts they learn in their classes,” he said.  “This opportunity is great marketing and a good recruiting tool for our department and the sports communication major. It’s also great publicity for our university. President [Joanne] Glasser wants us to be a university of national distinction, and this puts us on the map.”

Because the Sochi Olympics is less than a year and a half away, Gullifor said the department is working on a condensed time frame to send applications into NBC.

All students interested in applying must attend a mandatory informational meeting from 6 – 8 p.m. Sunday in the Marty Theatre. The internship is open to all declared communication majors in good academic standing regardless of class standing.

Students on track to graduate before the Winter Games are still eligible to apply as well as students who participated in the Summer Games.