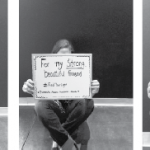 Lauren Campbell said she originally wanted to finish her capstone project as quickly as possible before her December graduation date.
But the senior public relations major said she’d never imagined her assignment, the Find Your Light campaign, would impact so many people in the Bradley and Peoria communities, including herself.
“This was supposed to just be a senior project,” she said. “But it’s so touching to me to see how many people it’s involved. It’s become more than a project.”
Campbell, along with fellow senior public relations majors Kelsie Barnhart and Meghan Loy, put together a campaign as part of the capstone class to focus on promoting domestic abuse awareness.
And the campaign has grown roots in the Peoria area – Find Your Light is a partnership between the Center for Prevention of Abuse and Hey Lola, a local boutique.
The project topic is an important one, Campbell said. Through research, she said one in four women will be affected by domestic violence in her lifetime. Taking this into account, 825 out of 3300 women on Bradley’s campus will be affected, as will more than 15,000 out of 60,000 women in Peoria.
“If you’re not aware of [domestic abuse,] then it’s not on your mind,” Campbell said. “But everyone seems to know someone [who has been a victim].”
The campaign’s goal is to raise 500 pledges of support by Nov. 9, which will be presented both online and to the women at the Center.
“When we went to [the Center], the women said that they thought the only support they had was each other,” Loy said. “We said we could think of people outside [the Center] that would show support through pledges.”
So far, the trio has collected more than 300 pledges from Bradley students and members in the Peoria community, including Mayor Jim Ardis and several city councilmen and councilwomen.
“We spoke at a city council meeting, and we saw lots of interest to sign pledges,” Campbell said. “We’ve seen support at Bradley … and from guys you wouldn’t expect to be so heartfelt.”
At the Oct. 18 Late Night BU, more than 200 students signed a pledge. Barnhart said Theta Chi fraternity, Alpha Chi Omega women’s fraternity, Epsilon Sigma Alpha service organization and Student Senate have all had overwhelming support for the cause.

There will be an event this Saturday, November 9 at Hey Lola from 10-4.  It centers around giving community members a chance to come take a pledge photo.
Barnhart said she hopes more people will participate and make a pledge, no matter how specific or broad their pledge may be.
“So many people stay silent [about domestic abuse],” she said. “This will show that there are people out there who care. There will always be people there to find your light.”