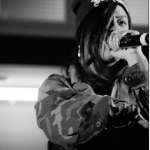 A new sound in the form of a rap contest was brought to Late Night BU on March 8, allowing six students to compete in a battle of words.

The concert, which was hosted by Students United for Change with the help of Activities Council of Bradley University (ACBU), featured guest stars Rockie Fresh and Nitty Scott, MC after the students performed.

“The heart of the event is to promote rap music that is not as well known,” Hardy said.

The concert was originally scheduled for last semester but the process of pitching the event and negotiating contracts of Nitty Scott, MC and Rockie Fresh took longer than expected, Hardy said.

Students United for Change is a student-run organization that brings minority organizations to campus. The group also works to serve the Peoria community.

The concert began with Bradley students battling each other in a free-style contest known as a cypher. The students rapped for two rounds until a winner was chosen by audience applause. Freshman television arts major Reuben Riggs won and rapped a song of his own.

“It felt great to come out on top against some great competition,” he said. “I just tend to step up when I need to and I did that night.”

Female rapper Nitty Scott, MC took to the stage next. Dressed in a camouflaged jacket and black stocking cap, she called on the audience to “support that indie hip hop.” Scott performed songs from her album, “The Boombox Diaries, Vol. 1EP.”

According to Scott’s official website, she is introducing “an independent music movement known as The Boombox Family, which focuses on organic and message-driven hip-hop.”

Rockie Fresh followed Scott’s performance. Red and blue lights flashed while Rockie Fresh sampled fellow rapper Rick Ross’s song “Hold Me Back” and shook hands with the audience. He ended the show by taking a picture of the crowd for his Instagram account. Rockie Fresh is signed to Rick Ross’s label Maybach Music Group.

Sophomore health science major Bianca Brown said “both performed well,” but noted a lack of enthusiasm from the audience.

“As many people as there are at Bradley, they could have supported it. Nobody cheered,” Brown said.

“The crowd was weak,” she said.

This is the second hip-hop performance Bradley students were able to see at LNBU. Students Organized for Change first hosted the event last year. Junior television arts major Mariah Hart said she was excited about the rap show.

“We don’t have that many urban events,” Hart said. “It’s nice to have something different on campus.”