The apple doesn’t fall too far from the tree 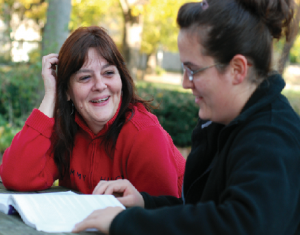 While many Bradley students graduate with families in the stands, senior education major Danielle Grant will have her family right by her side.

She will be finishing her education at Bradley alongside her mom, Darlene Grant, also a senior education major.

Darlene said she is excited to get her degree at the same time as her daughter.

“It’s unusual,” she said. “I’m glad that we’re doing it together because she’s been following in my footsteps. But I did tell her that I will be getting my degree first, I’ve been working on it a lot longer.”

Darlene has been working on her degree at Bradley since 2002. She works full-time and has been raising her two daughters on her own, so she could only take two classes at a time. She said the hardest part of being a student and working full-time is time management.

“Danielle was really into basketball so I didn’t like missing her games,” she said. “I remember times when I went to [Illinois Central College] I’d be in the parking lot knowing that she had a game and I was going to class, and I’d leave and go to her game instead.”

Danielle and Darlene both received their associate degrees at ICC at different times. Darlene said she always joked that Danielle would eventually catch up to her, and once she got to Bradley and began taking classes, she did.

Danielle said a big part of her decision to attend Bradley was her mom already attended school here. The same went for her choice of major.

“I kind of followed in my mom’s footsteps,” she said. “She’s been in school since I was young, and she raised me and my sister. I look up to her, so when she went to Bradley I just decided to go there with her.”

Being in the same major has resulted in the two being classmates several times. They have worked on group projects and studied for their tests together, but Danielle said Darlene never had to pull the mom card to motivate her to work harder.

“We’re really competitive with our grades so we made it a competition to see who could get the better grade in the class,” she said. “She beat me one time, but other than that, we both got the same grade.”

Darlene said being in class together made it easier to stay motivated.

“It’s really fun because we try and beat each other,” she said. “We’ve compared our ACT scores and basic skills, all of those test scores.”

Danielle said she is very excited to graduate, and plans to start substitute teaching right away.

While standing next to Danielle will be different than sitting in the crowd like she’s done at her daughter’s other graduations, Darlene is happy they get to experience it together.

“It was hard, but we made it through, the three of us,” she said. “I am so proud of my daughters and the women they’ve become.”