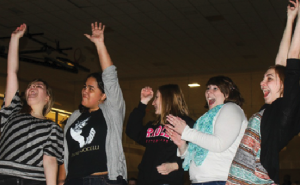 For the first time in years, the Activities Council of Bradley University (ACBU) will bring country to campus. On Saturday, it was announced The Band Perry will be the headline artist for the Spring Concert at the Renaissance Coliseum on April 21.

After reviewing responses from a student survey distributed last semester, ACBU concert coordinators said many students were interested in seeing a country group brought to campus. Concert Coordinator Matt Olivero, a senior mechanical engineering major, said they decided to see what they could do.

“Usually country artists are really expensive,” said Olivero. “The artists no one has heard of are in our price range and those who are big are too expensive. There really isn’t a middle ground. But we had an opportunity present itself and we ran with it.”

“[My sister and I] were really excited when we heard The Band Perry was coming,” she said. “The first thing we did was text our sister because she’s going to come down for it.”

Senior Nigel Townsend said he is looking forward to the show.

“I’m not familiar with The Band Perry because they are relatively new but it is something different and it should be fun,” he said.

Sophomore television arts major Laura Wigodner said even though she doesn’t plan on attending, she said a country artist is an appropriate choice because many students at Bradley love country.

“I’m probably not going because I don’t like country,” she said. “My friends are all trying to convince me to go but I don’t want to spend money on something I won’t like.”

Along with a new music genre, there will also be many organization changes in effect at this concert. In the past, ACBU concerts have been hosted on weekdays, but this spring the concert will be hosted on a Sunday.

“I like that it’s on a Sunday,” said sophomore theater major Rachael Pell. “During the week everyone has a lot to do, having it on the weekend is more convenient.”

This concert will also come with an added cost. In comparison to the $10 student ticket price in the past, student tickets for the Spring Concert will cost $15. After April 1st the price will increase to $20 per ticket.

“I wouldn’t pay $15 to see someone like GirlTalk or another band I had never heard of before,” said Concert Coordinator Dashawn Cason, a junior economics major. “But The Band Perry has a really big name and I feel that a cost of $15 won’t turn people away.”

Townsend said be believes the price increase might make a difference for students.

“The extra five bucks will be a hit or miss,” he said. “It may turn people off especially since the band is still trying to build a reputation.”

Olivero also said that in the survey distributed many students said they would pay up to $25 for student tickets to attend an ACBU concert.

Another change to the concert will be noticeable within the arena. There will 1,500 general admission tickets as well as seating on the floor. Olivero said they made this decision in order to maximize space available in the arena.