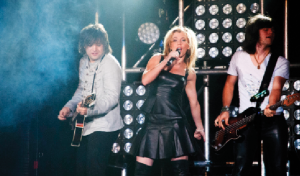 Kimberly Perry stared in awe as more than 3,000 students and visitors finished the opening chorus to the hit song “If I Die Young.”

The voices, a cappella save for Kimberly’s guitar, carried the rhythm through until the band picked up at the end of the verse.

In this way and many others, The Band Perry’s record-breaking concert in the Renaissance Coliseum on Sunday night was a show of and for the people.

“Country music is the people’s music,” Kimberly said in between songs. “So this stage is yours … All we ever imagined was hearing you sing our songs.”

The Activities Council for Bradley University’s (ACBU) show sold more than 3,150 tickets and was the largest concert hosted in Coliseum, which is almost three years old.

“Each member helped out in some way or another to have The Band Perry concert go as smoothly as it did,” she said. “It is a great feeling to be recognized by the students for our achievement.”

Kimberly, Reid and Neil Perry, all siblings, make up The Band Perry. Kimberly provides the lead vocals, while Reid and Neil perform back-up vocals and play bass guitar and lead guitar music, respectively. The band also travels with a drummer, secondary guitarist and other assorted musicians, including a fiddler.

They had a few special guests in attendance, including the three stars’ mother and their opening act, the Kari Lynch Band.

“You guys might be the most fun crowd that we’ve ever played for,” she said.

“The part I most enjoyed about the concert was seeing it all come together,” she said.

Junior accounting major Megan Herman said she had a very unique experience at the concert.

“I was in the front row, so that was pretty cool,” Herman said. “I also got a guitar pick from [the band].”

Both the Kari Lynch Band and The Band Perry are country bands. The Band Perry played all seven of their released singles in its set, including “Better Dig Two” and “All Your Life,” which both hit no. 1 on the U.S. “Hot Country” chart.

But the fiddles didn’t stop the performers from branching into different genres as well during the show.

They played select pieces of songs from various performers, including Tom Petty’s “Free Fallin’,” fun.’s “Some Nights” and even the Christian hymn “Amazing Grace.”

Some attendees said the covers made the night even more memorable.