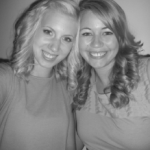 Two Bradley students made their claim to fame this summer appearing on national television for a special surprise.

The Kathie Lee and Hoda show is part of the ‘Today Show’ and starts at 10 a.m. on weekdays. The show features talk on topics like celebrities, relationships, makeovers, makeup tips and fashion.
The contest was to show how an individual and a friend are like Kathie Lee and Hoda, while acknowledging one major difference between one another.

The seniors found out they had won a 3-night, 4-day stay at the Kona Kai Resort in San Diego, Ca., which they plan on using in January.

Johnson said she watches the show in the mornings, which is how she found out about the contest. She said she immediately thought of Duitsman, who she met through Kappa Delta sorority freshman year.
“I started researching it and figured out that it was exactly our friendship. I was like, we could win this so easily,” she said.

The requirements included a 60-second video and a written essay.
“It was a pretty entertaining process in itself making the video, because when we taped it, it was at three minutes,” Duitsman said. “We finally cut it down to 60 seconds which was difficult. We also had a 200 word essay, which was also very difficult because that’s not a lot of writing.”
Duitsman received the big news at work, while Johnson was away on a cruise in the Caribbean.
“I was sitting in my office and I got a call from Brittany from the ‘Today Show’ telling me that we were finalists,” she said. “There was nobody in the office that day, so I was just at work like celebrating by myself.”

Away on vacation, Johnson was without cell phone service and was unaware of the news until she returned home.
“My phone started blowing up with text messages and a voicemail, so obviously I go to the voicemail first, and it was the ‘Today Show’,” Johnson said.

The show segment premiered on Aug. 13, during which the seniors needed to be connected to the Google chat video service, Google Hangouts. Duitsman said the time zones made the scheduling difficult.
“I was away in Las Vegas, so I had to be ready by 6:15 a.m. in a hotel with all of my family members,” Duitsman said.

On the Monday prior to the show’s premiere, the seniors logged into Google Hangouts, which Johnson said made her suspicious.

“I’m still in shock that we won. I never thought it was even a possibility until I found out we were finalists,” Duitsman said. “I think it might start to hit me when Christine and I actually get on the plane.”