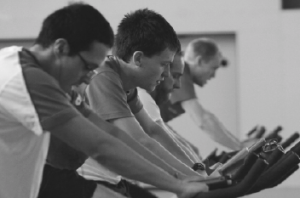 With the Markin Recreation Center shielding them from the winter temperatures and snow outside, two dozen individuals participated in the third annual Indoor Triathlon last Saturday.

The event, put on by the Bradley Triathlon Club, started with a 10 minute swim. This was followed by a 10 minute transition period before heading over to the spinning bikes set up in the MAC court. After 20 minutes of biking, participants had a five minute transition period before the final portion of the indoor triathlon, a 15 minute run. Though some thought the triathlon was simple, participants said it was rewarding.

“As far as triathlons go, this is about as easy as it gets,” Bradley Triathlon Club President Andrew Cain said. “This event is great for anyone, whether they are looking to win or just to finish their first triathlon. The sense of accomplishment that comes with completing a triathlon is amazing.”

Triathlon Club member and freshman mechanical engineering major Kyle Beres, who completed his first indoor triathlon in early February, agreed with Cain about the sense of accomplishment that comes from completing a triathlon.

“[A triathlon] tests how far you’re willing to push yourself both physically and mentally,” Beres said.

When all of the events were complete, it was clear junior mathematics and economics major Sean Orlando would take first place, defending his title from last year.

Orlando is a personal trainer, group exercise instructor and Bradley cheerleader. Because he is currently training for the Crossfit Games and not running races like last year, he said he was unsure about his chances for the repeat this year.

“Going into the event I was quite nervous,” Orlando said. “I wanted to repeat, but I knew last year I was much more prepared.”

Despite his different training, Orlando’s overall calculated time of 52:09 gave him first place once again.

Awards were given based on a new scoring system compared to the two previous years, according to Cain.

“Instead of a points-based system based on place, … we calculated pace in each event and then calculated how long it would take to finish a race based on actual sprint distances,” Cain said.

Cain said the event, which serves as a fundraiser for the Triathlon Club, ran smoothly due to the help of Mike Keup, executive director of the Center for Student Involvement, Larry Weinzimmer, Bradley Triathlon Club advisor and Dick Lansing, alumnus sponsor, in addition to numerous volunteers. Running Central and Bushwacker also helped by donating the awards.

The club is looking at hosting its fourth annual indoor triathlon next year.

Cain said he encourages anyone interested in joining the Bradley Triathlon Club to contact him. He said they are a supportive group regardless of previous experience or finish times.

“Our goal is to promote the healthy lifestyle that comes with the sport of triathlon and to have fun in the process,” Cain said. “Anyone who wants to be part of that is more than welcome regardless of skill or fitness level.”

Two-time champion Orlando had some simple advice for those looking to train and participate in similar events in the future.

“Don’t ever get the thought ‘I’ll start tomorrow’ into your head; it dooms you from the start,” Orlando said.  “Start today, right now.”