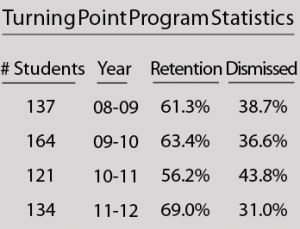 In an effort to help students become academically successful, the Turning Point Retention Program adopted a new structure that has resulted in positive results.

The Turing Point program, which aids in correcting behaviors and improving study habits for students who drop below a 2.0 grade point average (GPA), recently moved from a one-on-one assistance program to a classroom setting.

“I think the turning point program is a useful tool because it gives students a chance to redeem themselves from the mistakes they made past semesters,” said Brittaney Flowers, sophomore public relations major and a past participant of the program.

The program first began in the fall of 1995 and was structured to allow students to work in small groups. In 2008 the program was changed to focus more on one-on-one meetings with the coordinator of the program as well as graduate students. Last fall, with the introduction of a new program coordinator Pam Miller, the program underwent another redesign, changing from a one-on-one focus to a classroom setting.

“I knew this would be something I would like to do because I have always had a real heart for helping students,” said Miller, who had worked with Student Support Services for nearly 9 years prior to joining the Turning Point Program. “It seemed that one-on-one was not as effective as far as retention, and I saw a need for more resources for freshman students.”

“It is not always just academics,” said Miller. “A lot of students have a high school mentality, have depression or are involved with alcohol or drugs, or do not have strong time management.”

As part of the program students are required to meet on a one-on-one basis and enroll in AEP115, a learning enhancement strategies seminar. Miller teaches multiple sections of the course each semester to help students advance academically. Although the seminar is required for students in the Turning Point program, it is an open class that is available to any student on campus.

“There are always more students in the program during the spring rather than the fall because of freshmen,” Miller said. “A lot of freshmen students don’t have the study skills or a good attitude about writing coming into college and find themselves struggling after first semester.”

The course focuses on key components of being academically successful such as time management and prioritizing tasks, study skills, setting goals and motivation.

“No matter what level you are academically, anyone can really grow from some of the things we talk about in class,” Miller said. “It can help prevent anyone from going on probation. The more tools I can get into students’ hands, the better.”

Flowers said she agreed that the course not only helped her succeed, but would be beneficial for other students.

“I recommend this program to all students. It’s a chance to learn more tools to help further your education,” she said. “It helps you become more confident in your school work when you apply everything you learned in the class.”

The goal of the Turning Point program is to achieve a 2.25 semester GPA or overall 2.0 GPA. However, if a student is unable to raise their semester or overall GPA, they are at risk of being academically dismissed from the university.

“A lot of people want to stay at Bradley,” Miller said. “The program is there to encourage them, instill confidence and change their mindset going into a new semester. When students finish a semester, knowing they are on academic probation can really deflate them.”

Miller will continue to operate the program utilizing a classroom setting, and will potentially expand the program to include a mentoring opportunity, she said.