Turnstiles to be installed in the library for extra security 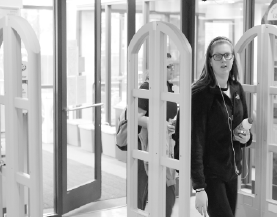 New security measures in the library will require students to have their IDs to enter the library at all times.

Over spring break, turnstiles similar to those at the Markin Center will be installed inside the library’s second set of doors where the current gates are. They will be equipped with swipe access and proximity sensors for those with both the new and old IDs.

“The turnstiles are being installed for security purposes” said Barbara Galik, Executive Director of the Cullom-Davis Library. “Although there have not been any serious incidents in the library in the recent past, from conversations I have had with students, they have concerns about security in the library.”

While there have been concerns “about individuals not affiliated with the University being in the library,” Glaik said the library will still be open to the public before 10 p.m.

“This will not prevent the public or other visitors from using the library,” Galik said. “There will be a service gate that library staff will open and visitors will have to present a government issued ID or a student photo ID from a high school or university.”

Visitors will also be required to sign in and out when coming to the library.

“I think it’s a good idea because it would keep superfluous people out of the library,” senior elementary education major Sam Reginald said.

During the summer of 2010, swipe card access was installed in the library so that only students could enter after 10 p.m.

“The current system has been effective, provided students do not let anybody in behind them or give their ID to a non-student,” said Galik.

The library cannot just change the current system of swiping into the building to extend to the rest of the day because it must be available for use by the public.

“We are a U.S. Government depository and, as such, we have to be open to the public during some of our hours,” said Galik.

After 10 p.m., Bradley students and staff will still be required to swipe into the building as well as through the turnstiles.

While some construction and installation of the turnstiles will begin this weekend, it shouldn’t affect student routines.

“I feel like it’s not completely necessary, but it makes a lot of sense,” said freshman animation major Eric Wu. “You need your ID to get into the dorms anyways, so it’s not a big inconvenience.”