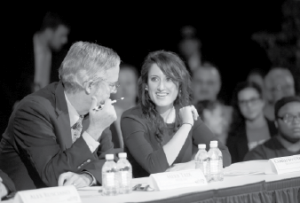 Bradley students are rarely thrown directly into their careers while they’re still enrolled, but that’s exactly what happened to one student.

On Oct. 25, a debate was hosted between the two candidates of the 17th District Congressional race at the WTVP Studios in downtown Peoria. Since Bradley is a major voice in the 85-mile district, senior public relations and political science major Camille Ivy-O’Donnell sat on the three-person questionnaire panel.

The incumbent is Republican Bobby Schilling, and his challenger is Democrat Cheri Bustos. Since the 2011 redistricting, Illinois’ 17th District has been listed on the Democratic Congressional Campaign Committee’s “Red to Blue List,” which indicates that the district is expected to flip from Republican to Democratic control.

Along with the typical candidate call-outs, the representatives discussed lowering the deficit and creating jobs. Bradley students who submitted their questions to Ivy-O’Donnell discussed gas prices, free trade and the changes to Main Street.

She said she believed that the questions were well-received and answered adequately.

Chosen due to her participation in the Institute for Principled Leadership in Public Service, Ivy-O’Donnell said Bradley’s involvement benefitted the students and the school in general.

“I think this opportunity not only allowed students… to feel the reality of the campaign but it also meant more to the Bradley student population holistically,” said Ivy-O’Donell. “Bradley has a tendency to be a bit less politically active than other universities. This allowed not only the Peoria area and the Quad Cities to see that we do care, but nationally I believe this created positive buzz for our university, in regards to our political activism.”

“It was a great opportunity for Bradley students to participate in our democracy,” said McMillan. “Bradley students submitted questions online, 20 students filled the first two rows of the live audience and Camille did a great job of serving as one of the panelists.