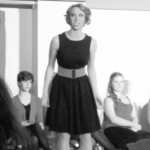 As of now, one in three women will be abused or raped in her lifetime. But students on campus made an effort to stop the violence with this year’s performance of the Vagina Monologues.

The show, hosted March 8 and 9 in the Student Center Ballroom, attracted more than one hundred attendees to each performance and raised nearly $2,000 for the Center for Prevention of Domestic Abuse in Peoria.

The Vagina Monologues has been on campus for about a decade. This year, the national “One Billion Rising” campaign was the focus, advocating for an end to all violence towards women.

The Vagina Monologues, based on author Eve Ensler’s book “Vagina Interviews,” is a collection of interview responses from more than two hundred women, answering questions concerning life, sexuality and the complexities of being female.

The show was both directed and performed by more than twenty Bradley female students in celebration of V-Day, the organization behind the “Vagina Monologues” productions and outreach programs.

Feb. 14th, 2013 marked the beginning of the campaign to call all women to stand up against abuse. “One Billion Rising,” which is the largest global campaign in the history of anti-violence against women, has spread to hundreds of countries, encouraging women to rise up and dance against violence.

The Bradley performers danced their way to a stage equipped with a only a row of chairs as the set. One by one, the students delivered monologues representing either a single voice or a compilation of multiple women.

The show addressed taboo subjects such as the vagina, sex, lesbianism, rape and abuse.

Although V-Day and the Vagina Monologues are aiding the anti-violence campaign for women, students said the show reached out to men as well.

“Men need to join in the fight too – to show abused women that not all men are bad,” said sophomore psychology major Meghan Fogler. “Men can help make a difference.”

Testimonials from real victims and those who have known victims took the stage after the performance. The first-hand accounts displayed the accuracy of the one in three women abused statistic.

“The sad part is that you might never know, but that girl who sits across from you in class may have been abused or raped,” junior education major and cast member Jaclyn Gitlis said.

Students said the show was important in raising awareness about violence against women.

“The beauty of this show is that it gives a voice to women,” freshman music theory major Angela Paulick said, “women who often times feel voiceless.”