Wags for Mags brings service dog group back to Bradley 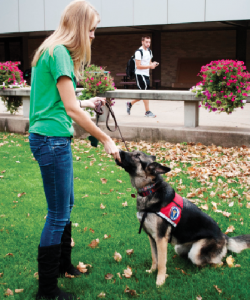 Students aren’t the only ones getting an education on campus – Wags for Mags service dogs are taking classes for their future families as well.

In 2009, two students, Brandi Arnold and Michelle Kosner, entered the Springboard competition to launch their idea for a not-for-profit service dog training group, called Paws Giving Independence (PGI) They won third place, and from there the group expanded to the Peoria community.

After Arnold and Kosner graduated, PGI still wanted a Bradley connection. That’s how students who had been involved with PGI started Wags for Mags, the Bradley branch of the organization.

“The group was named after a volunteer who died young, about 16 years old, last year,” said senior Sarah Glasgow, who is the group’s volunteer coordinator. “So we named it in her honor.”

Students involved help train the dogs at a weekly class to prepare them for service duties with a family or an individual.

“We have 10 student volunteers and each is paired with a dog,” Glasgow said. “They help train them at our Tuesday night classes. Some of the volunteers are even with the dogs all day, bringing them to classes, to the store, everywhere they go.”

The dogs stay with a foster family until they are placed in a home, and the weekly classes with students help prepare them to leave their foster owners, Glasgow said.

“The dogs tend to get attached to people, so that’s why we try to get them used to being away from their foster families,” she said.

Senior Caitlin Reilly, president of the group, said each dog learns a base set of skills, but their most apparent strengths help match them with a home.

“It depends on each dog which home they’ll go to and when they’ll be ready,” she said. “We have to see who they fit best with because they have different skills.”

For many of the dogs, Glasgow said, the group is their chance for survival.

“We get a lot of the dogs from kill shelters and breeder donations,” she said. “We got one of the dogs 24 hours before he was scheduled to be euthanized.”

Glasgow said the dogs can be trained as partial sight, seizure and companion dogs, to name a few.

“With one of the volunteers, a professor for their class has a pacemaker,” she said. “And whenever it resets, the dog starts to whine. They can be perceptive to heart issues.”

The group hosts fundraisers throughout the year, but all of that money goes back to the parent organization, Glasgow said.

“We also don’t charge people for the dogs,” she said. “There are other organizations that charge $10,000 for a dog.”

Reilly said students can be fosters if they live in the St. James Apartment Complex, but she is looking to expand that.

“We are going to meet with housing to present a plan to allow them in the dorms, too,” she said.

Senior fundraising chair Brittany Zarate said the best part of the group is seeing a dog placed with its new home.

“It’s really cool to see the progression from one year, when they’re pulling us across campus and can’t sit still for five minutes, to the next, when they’re being placed with a family,” she said. “It’s great to see them change.”