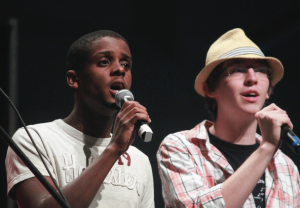 In anticipation of the upcoming presidential elections, Bradley hosted a youth rally to inspire students to register to vote – and engaging more than 200 students.

“Engaged: A Youth Rally to Inspire Civil Engagement and Civility in Politics”, was sponsored by Bradley’s College of Republicans and Democrats, the Illinois League of Women Voters (LWV) and the Institute for Principled Leadership in Public Service (IPL) on Oct. 4.

Brad McMillan, executive director of the IPL, said the goal of “Engaged” was to inspire young voters to get involved in America’s Democracy and vote.

“The most important thing you can do after ‘Engaged’ is register to vote,” said McMillan.

“Engaged” provided the opportunity for students to register to vote, as well as a chance to ask any questions about the voting process or elected officials. The event also provided free pizza, drinks and dessert, along with entertainment from some of Bradley’s staff, students and Peoria’s elected officials.

“With participation from the award winning speech team and ‘On The Rocks,’ I feel like students left pleased that they took time to attend,” said student body president Alan Bukingolts. “Most importantly though, the message of why it’s important for people our age to vote was made clear.

The event welcomed many guest speakers and Illinois politicians, including Lt. Governor Sheila Simon. She said she believes hearing the voices of the youth has a greater impact than one may think, and students should take an interest in that.

“Think about what you can do with your free time to support a candidate you believe in,” she said. “Your voices are important, use them.”

“In 2008, the youth voter turnout was 48%, the second largest turnout in history,” he said. “We need to make some noise and vote this November so we can remind our country that the youth has not forgotten about the history of our nation.”

Peoria City Councilman Ryan Spain said the most important time to get involved is when you are young. He also said being young is the time of your life when your opinion matters most and has the strongest effect on what others believe. He said it is never too early to take action.

“It is much better to be proactive than to be reactive,” said Peoria County Board Member Jimmy Dillon, who said he agreed with Councilman Spain’s philosophy.

At the end of the event many students said they felt the rally encouraged them to vote by getting them involved with the speakers, but at the same time they said it informed them of why voting is important.

“Voting is really important because your one vote makes a huge difference,” said freshman biology major Celine Coleman. “It impacts you and everyone around you.”

McMillan said 43 students registered to vote with the help of the LWV.

“The event showed students that politics can be fun,” McMillan said. “The student speakers inspired students to get engaged in the upcoming election.”

Many students said overall they felt the event was a success. They said they are looking forward to hopefully seeing the event again in four years for the next election.

“For each person that dislikes America, we can find 100 others who yearn to be a part of our freedom and share our voice,” said Cochran. “Be inspired by those who gave up so much for your freedom.”