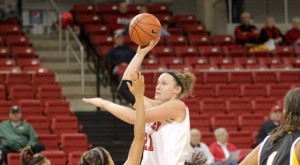 “I was really disappointed with our energy level to come out, especially for the first 31 minutes of the game,” coach Paula Buscher said. “I thought the last nine and half minutes, we really started playing defensively like we need to play.”

Buscher said she thought the defense was critical to the comeback.

“I think that caused some defensive stops, then we got a little bit more aggressive offensively, but it was just disappointing that we dug such a big hole, it was tough to come back from.”

The Braves trailed by as many as 14 in the second half before cutting the deficit to two points with under three minutes to play. However, it was missed free throws and inside shots that cost Bradley the game.

“It’s frustrating because we like to be at home, so it’s frustrating losing this but at the same time we have such a quick turnaround and it’s early in the season,” Buscher said. “You have to learn from some things like this.”

Senior Leah Kassing led the Braves with a career-high 23 points, while senior Mackenzie Westcott topped Bradley with eight rebounds. Kassing added seven rebounds and shot 10-for-16 from the field.

Kassing leads the team this season with 13.6 points per game and is second on the team with 6.9 rebounds a contest.

Freshman Shronda Butts added a career-high 13 points in 19 minutes off of the bench including two 3-pointers.

“The kid who I thought came off the bench and played very well was Shronda Butts,” Buscher said. “Shronda came in and we needed some dribble penetration against their zone, and Shronda provided that and got herself to the basket and then that created some openings for her three as well.”

Wednesday night, Bradley beat Butler 71-63 to improve to 5-3. Sophomore Catie O’Leary scored 12 points in the second half and led the Braves with 15 points in the game. Kassing added a double-double with 13 points and 11 rebounds.

Bradley heads on the road for two more games starting Saturday at 1 p.m. against Central Michigan. The Braves return to Peoria on Dec. 17 to face Iowa.

“It’s frustrating because we had a lack of focus in the game tonight, and that’s not normal of this team. This team usually has a great level of focus, so it’s a little bit frustrating and at the same time we have to turn around and regroup.”