With a new coach and new direction the Bradley men’s basketball team is once again struggling in Missouri Valley Conference play.

After winning just four games in the conference a season ago, the Braves have just one win at the midway point of MVC play.

Bradley will enter tomor- row night’s game on the road at Creighton with losses in 12 of its last 13 games.

Tuesday the Braves suffered their ninth conference loss of the season in a 77-60 defeat on the road at Southern Illinois.

BU was outscored 40-24 in the first half and SIU’s Justin Bocot had a stretch where he hit three three-pointers in a 99 sec- ond span.

On Jan. 21 Missouri State trav- eled to Carver Arena and barely squeaked by the home team with a 51-48 win that came down to the final possession.

Missouri State coach Paul Lusk said that it did not surprise him that the Braves played so well, especially on their home floor. “It was not a thing of beauty by either team,” Lusk said. “We just hung in there. Any road win is to be valued.”

Sophomore big man Jordan Prosser led BU with 13 points and a game-high 12 rebounds. On one possession Prosser took a pass and had a one-handed jam with authority over a Missouri State defender.

Prosser said the guards were feeding him the ball successfully in the post so he looked to try to score the ball.

“They were looking more inside,” Prosser said. “I had it going a little bit and that helped to open things up for them out- side.”

Despite Prossers’ strong play in the paint, the rest of the team struggled shooting from the field at just 31%.

“We guarded about as well as 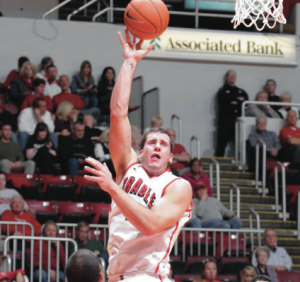 we could guard them,” Bradley coach Geno Ford said. “We con- tested pretty much every shot they had. We didn’t turn it over much. We just didn’t knock in many jumpers.”

The Braves defeated Northern Iowa 78-67 Jan. 15 at Carver Arena for its lone win in confer- ence play so far this season.

Junior guard Dyricus Simms- Edwards led BU with 26 points while Brown chipped in 23 of his own.

Bradley trailed 36-24 at half- time, but an inspired speech by assistant coach Willie Scott moti- vated the Braves in the second half outscoring the Panthers by 23 points.

The next home game for Bradley will be at 7 p.m. Wednesday night at Carver Arena.