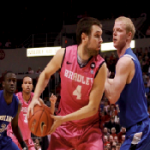 With a victory, the Braves play in the quarterfinals today at noon against Creighton.

The winner of the MVC tournament will be crowned Sunday and receives an automatic bid to the field of 68 for the NCAA tournament.

Bradley is the No. 8 seed and faces an uphill battle of winning four games in four days. No MVC team has ever accomplished the feat.

Braves’ coach Geno Ford said the key for the team is getting great play out of guards Dyricus Simms-Edwards and Walt Lemon Jr.

“The two guards certainly set the tone for us,” he said. “Walt and Dyricus are all-conference caliber players. When they’re able to dominate a game…it’s no secret they have to do it on both ends for us to be successful. They need to score close to 20. They need to shoot a good percentage and we’ve got to get those steals they’ve provided for us more often than not.”

Ford said the team has set its sights high but plans on taking one game at a time.

“We certainly are hopeful we can go down and play well [in St. Louis],” he said. “There’s a lot of good teams in St. Louis. It’s going to be a tough several nights for several teams down there.”

Last season, the Braves went into the tournament as the No. 10 seed and was eliminated in their first game Thursday night.

Bradley last reached the semi-finals in the 2009-10 season and hasn’t reached the championship game since 2005-06. That season the Braves went all the way to the NCAA’s Sweet 16.

Simms-Edwards was honored as the MVC Defensive Player of the Year in an announcement made by the league office Tuesday.

He set the single-season school record for steals and is only 12 away from setting the MVC record.

Simms-Edwards said it was an honor and a privilege to be recognized as the top defensive player in the conference.

“I play defense very personal,” he said. “I have a lot of pride in my defense. To get noticed by the other coaches and my peers means a lot. I’m very grateful for it. It definitely means a lot for me especially because I set the goal for myself at the beginning of the year. When you set goals you really want to reach them. When you actually do it, it’s a great feeling.”

Simms-Edwards said he came into the season wanting to play every possession and game as hard as he possibly could.

Joining Simms-Edwards on the conference All-Defensive team was Lemon. Lemon was also named to the second-team All-MVC.

Junior Tyshon Pickett was selected to the All-Newcomer team after transferring to Bradley from Dodge City Community College this season.