Braves can’t convert down the stretch; fall to IPFW 65-61 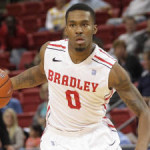 Before final exams begin, the men’s basketball team had one more game to play. With a rim malfunction before the game began, the Braves took on the IPFW Mastodons, desperately needing a win.

Unfortunately, the Braves could not convert at the end of the game, eventually falling to IPFW 65-61.

The first half started back and forth between the two teams and the Braves were only down three points at halftime. At the half, the Braves trailed IPFW 33-30 with the Braves once leading by seven at one point in the first half. But, the Braves came out a bit flat to start the second half and looked at a nine-point deficit. The Braves crawled back and kept fighting to try and squeak out a victory.

Like the first half, the second half looked very similar as both teams traded back and forth baskets down the stretch of the game. The Braves crawled back from being down six points with just above five minutes to play to take the lead at 61-59 with a tip-in layup by forward Auston Barnes.

The Braves needed to get one more defensive stop to seal the deal, but guard Luis Jacobo, leading scorer on the season for IPFW hit the game clinching three point shot with 27 seconds left. Jacobo was held scoreless until that three point shot. The Braves then came back down the court and gave the ball to Lemon Jr. who has won games before for the Braves with clutch shots, but tonight was different. Lemon Jr. finished with a team-high 14 points and four assists, although he had eight turnovers. Coach Geno Ford knows that Lemon Jr. will make shots, but for now he needs to work a little more to help the Braves win.

“Walt [Lemon Jr.] needs to finish and find a way to make those plays.” “He will work at it and get better.”

Ford also noted that the Braves played well, but IPFW came out up with bigger shots at end.

“We did enough things to win the game,” Ford said. “If we make one more play we are sitting here talking about beating a good team.”

Sophomore guard Ka’Darryl Bell added a career-high 11 points in 29 minutes for the Braves.

Bell said that the loss is just a minor setback for the Braves and he vowed that the team would be better.

“This is just a learning process,” Bell said. “We will get back in the lab and work on what needs to be corrected.”

The Braves take a break for finals before returning to try and snap a three game loosing streak in Las Vegas, Nev. to partake in the South Point Holiday Hoops Classic later in December. The Braves take on Portland and Pacific during the tournament.