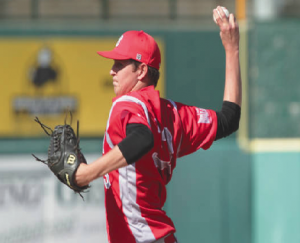 The Bradley baseball team finally had something positive to talk about after Wednesday. Sophomore Stephen Toma pitched six shutout innings in the first game of a doubleheader against Southern Illinois-Edwardsville. In the second game, the Braves’ bullpen held on for a 6-5 victory.

However there are still recollections of bad memories from last weekend. Prior to winning both games in the double header, the Braves have won just one of their past 10 games. They’re also sitting in last place in the Missouri Valley Conference with a 1-11 record.

“It hasn’t been because we’ve been beat, it’s basically because we beat ourselves [when] we don’t throw strikes on the mound, we put too many guys on and we’re giving away those opportunities and free runners,” coach Elvis Dominguez said. “Our guys are still battling and they come to the ballpark prepared, but it’s just we have to get our pitching staff in line to go with our offense.”

In the first game of the doubleheader, freshman Nolan Sponsler hit a RBI double to right field to score senior David Compitello and give Bradley a 1-0 lead in the third inning. Sponsler then singled in the fifth, stole second, and scored on senior Mike Tauchman’s single to right field. In the sixth, junior Greg Partyka hit his third home run of the season over the right field wall to give the Braves a 3-0 advantage.

“I really didn’t have a good Saturday and Sunday and I really worked on my hitting the past couple of days,” said Sponsler, who went 5-for-8 in the two games with two runs scored and three RBI. “I just wanted to come out today and not really have anything going through my head and just swing the bat.”

However, the Cougars made it interesting in the top of the seventh inning. Freshman pitcher Peter Resnick entered the game with the bases loaded and no outs. However, he was able to force a pop out before striking out the last two hitters to earn the save.

In the second game, the Braves had a 6-1 lead heading into the sixth inning. Yet, the Cougars used four hits to score three runs and cut Bradley’s lead to 6-4. SIUE added another run in the seventh, and had a runner in scoring position before junior Andy Johnson induced a groundout to end the game.

“After 27 years [of coaching] I wish I had an answer for you,” Dominguez said. “It’s all between the ears. These guys are good enough; their stuff is good enough to compete. As you notice, they’ll get the first two guys out then it’s all about finishing and then we get these predicaments.”

Bradley was swept by Missouri State last weekend. The Braves only lead for the entire weekend was on Friday after earning a 2-1 lead in the fifth inning due to Sponsler’s first career home run and Tauchman’s RBI single. The Bears responded with a bases-loaded triple in the bottom of the fifth inning to clear the bases and take a 4-2 lead before ultimately winning 5-2.

Missouri State won 12-2 Saturday and completed the sweep with a 6-2 victory Sunday.

The Braves are in the midst of a season-long. 12-game homestand and will host the Illinois State Redbirds this weekend starting at 6 p.m. Friday at Peoria Chiefs Stadium.