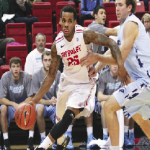 Senior Walt Lemon Jr. poured in an unofficial career-high 38 points and had the game winning basket with less than a second remaining as the Braves escaped Upper Iowa 85-83 in their first exhibition game Monday night.
Upper Iowa had the ball with a chance to take the lead with less 10 seconds left, but the Bradley defense forced a shot clock violation to give Lemon one last shot.
“I just wanted to be aggressive,” Lemon said of the final play. “I know the refs were calling the game tight. I wanted to get to the basket and either get fouled or make a play or if I missed one of my teammates would tip it in.”
The Braves inbounded the ball to the 6-foot-3 point guard with six seconds on the clock. Lemon drove into the lane and put up a one-handed floater that went in and he was fouled.
Ball game. The shot saved Bradley from an embarrassing loss to a Division II team.
“Right now, we tie our identity to offense and it’s a problem,” Coach Geno Ford said. “It was good for us to be in a close game because we have a lot of news faces in our locker room who need to learn how to win. But we have miles and miles to go defensively. We couldn’t guard anybody.”
Bradley allowed the Peacocks to go 14-for-27 from three and shoot 47 percent overall from the field.
Ford said the defense has a lot of work to do as the season progresses.
“We can’t become a team that wants to outscore people,” he said. “That just does not work. We got good depth and talent, but we don’t have enough fire power to just run up and down and outscore everybody. Our defensive energy looked like a NBA all-star game.”
For as bad as the Braves were defensively, they were pretty good on the other side of the ball. They shot 47 percent from the field and got to the free throw line 44 times. Lemon tied Bob Carney’s Bradley record by having 26 attempts from the charity stripe.
Sophomore Omari Grier had 15 points and junior Auston Barnes chipped in 10 points and 13 rebounds.
Lemon said the team needs to improve, but there is a lot of time to do that as the season moves forward.
“Nobody’s perfect,” he said. “I think it’s a process. We just have to keep battling together as a team. We’re not where we want to be right now, but it can only get better from here.”
The Braves will return to action at 1 p.m. tomorrow in their final exhibition tune up against West Virginia Wesleyan at Carver Arena. The team will open the regular season a week from today against Jacksonville State.