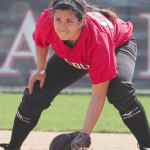 In the midst of a four game winning streak, the Braves entered a three game weekend series against Missouri Valley Conference opponent Wichita State, which included a Saturday doubleheader.

The Braves’ weekend featured power hitting from their lineup and a pitching gem from senior pitcher Madeline Lynch-Crumrine.

However, the power hitting and skilled pitching game wasn’t enough to take the series from the Shockers, as the Braves took the first game in shut out 5-0, but fell in the next two by the score of 6-5 and 13-3, respectively.

There were a total of five home runs in the three games, which included two from junior first baseman Alyson Clemente and a grand slam from sophomore utility player Kendall Duffy. Lynch-Crumrine pitched a four-hit shutout the first game of the double header to collect the win.

“Maddie threw a brilliant game on Saturday to start us, and we hit the ball well all week,” said Coach Amy Hayes. “The ball was really carrying for us all weekend.”

“Wichita State is good,” said Hayes. “They are a very good program, they’re hitting the ball well, and they’re well-coached.”

The first game was all Bradley, as the Braves took down the Shockers behind Lynch-Crumrine’s pitching gem and Duffy’s grand slam.

It was a close 1-0 game heading into the sixth inning, when Duffy hit her grand slam. That made the game 5-0, which became the final score when Lynch-Crumrine made Shocker catcher Melanie Jaegers line out to finish her complete game.

However, coming off a dominant win in the first of a doubleheader, the second game of the doubleheader had the Braves feeling heartbreak instead, as they fell on a furious comeback in the final inning 6-5.

“I think the second game against Wichita was disappointing for us,” said Hayes. “We had it, and we let them come right back in and that’s disappointing.”

The Braves held a lead the entire game, and had a 5-1 lead going into the final inning. The Shockers scored five runs, capped off by a walkoff single by Jaegers, which brought in the winning run.

“The way they came back was [there were] a lot of miss-hit balls,” said Hayes. “It was one of those things where it starts to unravel on you.”

“It was really, very frustrating to see how they got the five runs,” Hayes said.

The final game of the weekend series did not fair much better for the Braves, as they were overcome by a Wichita State onslaught, which featured the Shockers scoring 13 runs on 13 hits.

“There’s really no sit back games that we can have during this part of the conference,” Clemente said. “We know that every game is going to be a dogfight, and no team in the valley is going to sit back and let us take the win.”

The Braves come home for the first time this year, as they play eight of their next nine games at Laura Bradley Park and against MVC opponents. Their first homestand begins April 5 with a double-header against Loyola-Chicago.

“We’re content, but we know we can do better,” said Clemente. “[We] really want to make a statement in the valley, showing what Bradley softball can do.”