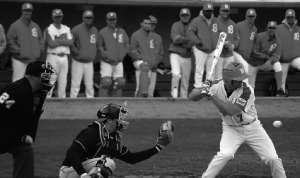 A new season for the Bradley men’s baseball team is fast approaching. With the season opener against Virginia Tech looming, the players and coaches are all ready to get back on the diamond.

“We’re all kind of sick of being inside right now, “said senior Rob Elliot. “We put in a lot of hard work this offseason. We’re excited to play another team instead of each other.”

Elliot, who set a career high in home runs last year with four, said he thinks the team can improve on the past season’s last place finish.

“I think we had a lot of talent last year,” he said. “We just didn’t do a good enough job executing when we had runners in scoring position. I think we can definitely do better on both ends.”

Part of improving the pitching will come from another great performance from senior Joe Bircher. Bircher set a career low in ERA with a 3.00 and is getting ready himself for the season with even greater expectations.

College Baseball Daily recently ranked Bircher no. 56 among the top 100 college baseball players, but he does not believe it will affect his preparation for the season. He hopes it has a positive impact on his whole team.

“If anything it just adds fuel to the fire” he said. “I got to live up to my name now. I just hope it gives everyone on the team an opportunity and a motive to work a little bit harder.”

Bircher, a left-hander, sees potential in his team.

“I think there’s a really good chance with the team we have now to make a bang once the season starts.

“I think the potential is there it’s just going to depend on how well we execute against everyone else’s best. I feel pretty confident about our ballclub and our abilities.

Dominguez took over as head coach in the summer of 2008. Seeing the players he coached as freshmen now as juniors and seniors holds meaning for him.

“This is the first group that we got here on campus as a coaching staff and now to watch them grow and all become juniors and seniors, it’s great to see the whole process take place.”

It has not all been easy. The Braves ended last season on a nine-game losing streak and Elliot believes the team grew from the experience.

“I think everyone took it pretty hard, but I think we really learned to grow from that,” he said.

Dominguez admits the experience the younger players gained was valuable, but he believes injuries may have hurt the team towards the end of the year.

“We were shorthanded, down four or five starters,” he said. “The numbers can be misleading, but they were all young kids thrown into the fire late in the season. You can’t put a price on experience so I’m looking forward to seeing how much they retain from that.”

For the Braves, spring cannot arrive soon enough. If they do reach the potential Dominguez and Elliot cited, it will come from the focus Bircher, and his teammates, all share.

“It’s fun to joke around with everyone but when it comes down to it, we come to the field and we get our business done.”