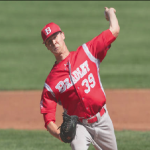 The Bradley baseball team was up 6-3 heading into the ninth inning Saturday. With a runner on second base, two outs and two strikes, they were one pitch away from ending a 14-game losing streak to Wichita State.

The Shockers responded with a double. Then the next batter drew a walk. And then there was another walk. And another. Next, the Braves made a pitching change, which led to another walk.

When it was all said and done, Wichita State tied the game 6-6 in the ninth, before winning 10-6 in 10 innings.

“[We] just didn’t make that key pitch,” coach Elvis Dominguez said. “We’ve got to learn how to finish ballgames like that and expect to finish the job. We have guys in the right situations they just have to come through for us.”

The Braves held a 5-1 lead heading into the sixth inning after sophomore center fielder Max Murphy hit a double down the left field line to score two runs. The Shockers responded with three consecutive singles off of freshman Brent Stong, who only gave up six hits in 5.1 innings while striking out four in his first collegiate start.

Senior John Nasshan, in his first appearance of the season out of the bullpen, struck out three in 2.2 scoreless innings before departing before the ninth inning. Down four runs, Bradley loaded the bases in the 10th inning, but Wichita State’s closer Brandon Peterson was able to force a fly out to right field to end the game.

“We just have to eliminate giving away so many free bases,” Dominguez said. “It’s not the hits that hurt us, it’s we give up one hit and we give up three runs because of so many walks.”

The weekend series opened with a pitcher’s duel. Wichita State’s Cale Elam and Bradley’s sophomore pitcher David Koll combined for 23 strikeouts. Although it was tied heading into the eighth inning, the Shockers were able to score three runs off of freshman Cameron Roegner, capped by a solo home run to left field by Wichita State’s Parker Zimmerman.

“[It was] great pitching by David Koll and great outing by him all night long,” Dominguez said. “It was a 1-0 game until we give up those three but he did a tremendous job.”

After Saturday’s heartbreaking loss, it was a slugfest at Peoria Chiefs Stadium. Both starting pitchers failed to last further than 1.1 innings and the Shockers led 9-7 after three innings. However, Wichita State’s bats never slowed down as they used 18 hits to score 18 runs and finish the sweep of the Braves. Bradley dropped to last place and a 1-8 record in the Missouri Valley Conference.

“We walked too many guys on base even with two outs, but I’m really proud of the way we came out on Sunday,” Dominguez said. “Because after a tough luck loss like that, the way they responded was very, very good from the standpoint that they just came out and competed from inning one. The downside of that is we didn’t pitch very well.”

The Braves beat Northern Illinois 19-0 Tuesday to improve to 12-19 on the season. Murphy led the attack by hitting two home runs. Next, Bradley will head to Missouri State for a three-game series this weekend starting at 6:30 p.m. Friday.