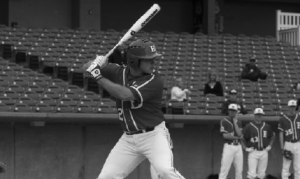 The Bradley Braves baseball team started off the season with one win, two losses and one rainout.

While that may not seem like the ideal outcome to some, junior Jason Leblebijian saw some positives in the team’s first few games.

“I was very happy. It’s tough going from indoors to outdoors, but hitters’ swings were good, we were just a little late. Fielders did well for the most part. The biggest thing was how great out energy was on the field. That’s the starting point for a good team.”

Elvis Dominguez, who is in his fourth year as the Braves’ head coach, thought the team played well in its first games.

“I thought overall we had a very good weekend. We’ve probably played 27 innings and we only had two bad innings. Unfortunately those two bad innings cost us that first game.”

Dominguez commented that Leblebijian has been part of the good he saw on the field.

“He’s been nursing a hamstring injury and to have him back on the field and the way he played was phenomenal.”

Leblebijian, whose batting average of .323 two seasons ago was the highest for a Bradley freshman since 2006, says in spite of those results, confidence is high among his teammates.

Leblebijian believes that his teams’ expecting to be there, referencing the postseason, is one of the biggest differences he has seen since his freshman year.

Junior Mike Tauchman also noted the change in his teammates.

“The belief in ourselves has gotten better every year. “

Tauchman said that in the past, the Braves did not always give the opponent the proper respect.

“A lot of times we would show up to the game and not be intimidated by the other team’s reputation or another player’s statistics. Now, it’s the attitude of we are all here for a reason and that’s because we are talented baseball players, and we can compete with any team we play against when we’re doing things the right way and playing hard.”

Tauchman has been an important piece for the Braves to continue improving, something that is not lost on Dominguez.

“He’s one of the guys who’s a marked guy because of the kind of years he’s had. He’s going to be pitched to very carefully.”

While it may get difficult at times on the field, Tauchman keeps things in proper perspective.

“Baseball is a game with so much failure in it. if you get out seven out of ten times you’re having a good season.”

To win, The Braves must stay confidant, and according to Leblebijian, remember that no game is out of reach.

“The second you let your guard down that’s when you start giving up. As long as you truly believe, you can win that game.”