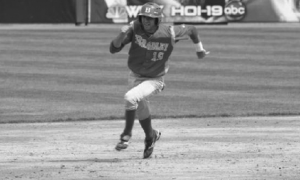 After a 2-1 weekend, the Bradley Braves baseball team finds itself back at .500, sporting a 3-3 record.

“He knows everyone is out to get him and pitches to him carefully and he still produced,” said coach Elvis Dominguez, referencing Leblebijian’s performance. “More importantly, he was able to come through in clutch situations.”

Leblebijian had three hits, including one home run, against UALR as the Braves never fell behind.

“He did it with runners in scoring position,” Dominguez said. “When the pressure was on, that’s when he managed to tough it through. That’s what you really need.”

Dominguez was also impressed with the pitching performances he received on Saturday. While Bircher is expected to be the ace of the team, Nasshan does not always get as much attention even though he has pitched well recently.

“He had a good outing the week before and he went out and pitched outstandingly again,” Dominguez said. “He gave up a run in the first inning and never gave up another after that.”

Dominguez also said he has never had a pitcher quite like Bircher, who struck out eleven in his second start of the season.

“I’ve been blessed to coach a lot of good arms,” he said. “Joe’s a different kind of pitcher. He commands three pitches. He’s not a power thrower but he really knows how to pitch. I think that’s what makes him successful.”

While the individual performances were certainly impressive, Dominguez thought what stood out most was which teams the Braves defeated this weekend.

“We went up against two teams that went to the NCAA Regionals last year,” he said. “The way we came out and competed and we never had one bad inning, I think was a testament to the kids, their mental approach, their energy and their focus for the entire game. We never had a lull for eighteen innings.”

“Those are the teams you want to play early in the season,” he said. “It gets you ready for conference play. Being able to beat them shows us and people around the nation that we’re ready, and can beat some of the best teams out there.”

Leblebijian did admit he was satisfied with his performance over the weekend, although he is quick to put the focus back on the team.

“I was very happy with it,” he said. “I was seeing the ball well. The most important thing is that we walked away with a victory. It made [playing well] that much better.”

With the offense and pitching staff running on all cylinders, the Braves hope to continue their winning ways as the road trip takes them to Memphis, Tennessee this weekend.

While Leblebijian’s commitment to a team focus may sound cliché to some, in his mind, and through his actions on the field, it is clear he truly believes it, and believes it will carry the Braves to victories.

“You’ve really got to work to move forward and try to just worry about your next at bat, or your next opportunity to help your team win,” Leblebijian said.

If the Braves can do that, there is no telling how far they might go this season.