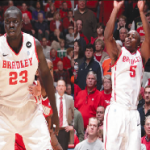 On Tuesday, sophomores Shayok Shayok and Jalen Crawford announced their intention to transfer from the program.

On the same day, 6-foot-8 forward Mike Shaw gave coach Geno Ford a verbal commitment after visiting campus. Shaw spent his first two seasons at the University of Illinois and was released from his scholarship last week. He will sit out the 2013-14 season before being eligible the following season.

“Jalen and Shayok were key members of our program,” Ford said. “We certainly appreciate all their efforts and how they’ve helped us the last two years. They both would like a fresh start and a new opportunity for some different roles, which I’m confident they’ll be able to find. We’re certainly going to wish them well and root for them to be successful at their next stop.”

Ford is prohibited from commenting on Shaw’s commitment until he has signed, which is expected after he finishes the semester in Champaign. He also received offers from DePaul and Tennessee before choosing Bradley.

Shaw was a first-team all-state selection at Chicago De La Salle High School in 2011 and was a consensus top-100 recruit. In 34 games at Illinois, he averaged 0.9 points and 1.4 rebounds.

Shaw played for the Mac Irvin Fire AAU program, which is regarded as one of the best in the country and was coached by current BU assistant Ronald “Chin” Coleman.

The Braves have already received pledges from three high school players; Michael Tucker, Jordan Swopshire and Stefan Zecevic, who will all be freshman next season. With Crawford and Shayok transferring, Bradley has two open scholarships for the 2013-14 season.

But the Braves aren’t done recruiting for next year.

“We’re really focused in on spring recruiting,” Ford said. “We’ve been very active with kids coming to campus already and have several more visits scheduled. We’re anticipating having a very good spring recruiting class to go with our fall recruiting class. It should give us an influx of size, athleticism and skill. We’re always looking for kids that fit the university from an academic and a social standpoint as well as being great players.”

Thomas Hamilton, a 6-foot-9 big man, from Chicago visited campus last weekend. Early in his career, he was touted as one of the best big men in the country before injuries dropped his stock. Hamilton just finished his senior season at IMG Academy in Florida and has reportedly been offered by Bradley.

The Braves will welcome 6-foot-5 forward Deshawn Delaney to campus this weekend. Delaney is also a Chicago native and is currently a sophomore at Vincennes University, a junior college in southern Indiana.