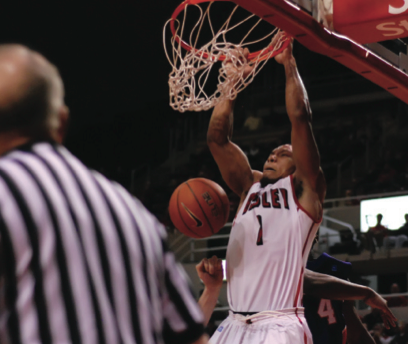 The Bradley men’s basketball team reached a new low Wednesday night in a loss to Evansville at Carver Arena.

The Braves were ran off the floor by the visiting Purple Aces, losing 92-62 in a game that was never close.

“We were atrocious on both ends,” Ford said. “Evansville’s better than us. They destroyed us in the first game. But they’re not that much better than us that the game should be that one-sided.”

BU fell to 6-18 overall and 1-11 in Missouri Valley Conference play.

This was the second time the Braves were beaten by 30 or more points at home this season. On Dec. 28, Wichita State beat Bradley by 39 points at Carver Arena.

Sophomore center Jordan Prosser said the team wasn’t good in any aspect of the game.

“We just weren’t ready to play,” he said. “We came out flat. When they’d get a run going, we’d just fold. When that happens, we need to come together as a team. Some players get into themselves instead of pulling together as a team.”

Evansville guards Colt Ryan and Denver Holmes combined for 47 points and 20 assists. The Purple Aces finished the game shooting 41-for-68 or 60%.

Senior Taylor Brown led the Braves in scoring with 18 points. Junior Jake Eastman and Prosser also scored in double-figures with 11 and 10 points respectively.

Prosser said he places the blame on the players and not the coaches.

“The coaches have us ready all they can,” he said. “We feel like we’re ready. But when the ball goes up, we just collapse. We weren’t talking on screens. Nobody was saying anything.”

Ford said that both the coaches and players need to be better.

The Braves next game is at 7 p.m. tomorrow night on the road against Interstate 74 rival Illinois State. Bradley will return home next Wednesday against Indiana State.