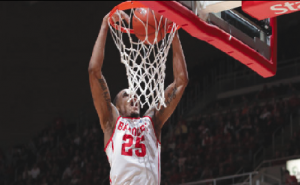 Nearly 20 minutes after the game had ended, Bradley senior Dyricus Simms-Edwards still couldn’t wipe the smile off of his face.

“Woooooo,” he said. “My fault, I had to get that out. That’s like four years worth right there.”

After losing seven consecutive times to Illinois State, Simms-Edwards and the Bradley seniors notched their first ever victory over the I-74 rivals 83-77 Tuesday night at Carver Arena.

“It’s been a long time coming,” Simms-Edwards said. “It always seems like the past few years we get in that situation where it’s close down the stretch and something crazy happens and they pull out the win.”

That wasn’t the case Tuesday night. After trailing by as many as 16 points in the first half, the Braves were the ones who took over the game down the stretch, outscoring the Redbirds by 14 over the final 20 minutes.

“We say family everyday,” Simms-Edwards said. “I heard Walt [Lemon Jr.] in the locker room saying we’re going to get this for the seniors. That means a lot to me. This is a great feeling right now.”

Bradley couldn’t have done it without Lemon. The junior guard scored a career-high 27 points to go along with five rebound and five steals.

The Braves overcame a miserable start and trailed Illinois State 25-9 with 9:02 remaining in the first half. But Bradley was able to cut the deficit to eight by halftime.

In the second half, the Braves held the Redbirds’ senior big man Jackie Carmichael to just two points and finished with a 46-14 advantage in points in the paint.

“We fought through the disappointment of an unbelievably bad start,” coach Geno Ford said. “We didn’t coach them out of that. They played out of that. For us, it was one of those the crowd wasn’t going to let us lose. There was just an extra energy in the building.”

Simms-Edwards and junior Tyshon Pickett each scored 15 points. Senior Jake Eastman chipped in nine points with all of his scoring coming in the second half.

Illinois State was lights out from the perimeter going 13-for-24 from three. But the Braves made up the difference by forcing a season-best 23 turnovers, which allowed them to take 16 more shots than the visiting Redbirds.