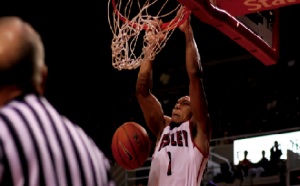 The Bradley men’s basketball team battled its way to a fourth-place tie in the Missouri Valley Conference standings with a 76-70 win over Evansville Tuesday night at Carver Arena.

It was a physical, back and forth affair the entire game with plenty of trash talk from both teams.

“They’re [Evansville] a tough team,” coach Geno Ford said. “That’s why I’m excited that we were able to beat them. They’re physical. They beat you up. They hold you, they grab you, they chuck you, they chest you…they really battle you.”

In the second half, Simms-Edwards sunk a basket over Ryan then was called for an offensive foul when Ryan hit the deck on the ensuing possession.

“There was a little jawing going on,” Simms-Edwards said. “That’s what rose our intensity level. It’s all a part of the game. It was all fun. There’s no personal grudges.”

The Braves raced out to a 16-4 lead less than eight minutes into the first half, but the Aces were able to erase the deficit and take a 33-32 lead into halftime.

Evansville continued its hot shooting in the second half, opening up an eight-point lead before Bradley answered with a 20-4 run to take control of the game.

“We just wanted to make sure we stuck together,” Simms-Edwards said. “That’s the most important thing. When things go bad, it’s up to the leaders of the team to keep us together.”

The Aces held a significant lead on the boards going into halftime, but behind junior Tyshon Pickett’s eight rebounds, the Braves were able to draw even for the game in the second half.

“We were in the locker room talking to each other saying we got to rebound more and lead to transition,” Pickett said. “If we rebound more we’ll win the game. That’s my pet peeve. I had to rebound.”

Bradley notched its sixth MVC victory giving the team as many conference wins as it has had the previous two years combined. The Braves also got their 14th win on the season, doubling their total from a season ago.

The win over Evansville keeps the Braves in the hunt to stay out of the play-in round of the MVC tournament in March. There are currently four teams within half a game of fourth place in the standings.

Bradley’s next game is at 2 p.m. Sunday at Carver Arena against Northern Iowa. The Braves will then take to the road Wednesday in the return game of the I-74 rivalry against Illinois State.