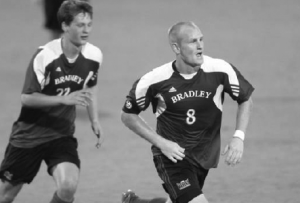 The Bradley soccer team had mixed results tying one game and winning another last weekend at the Evansville ProRehab Aces Classic at Arad McCutchan Stadium, but it was enough to earn the tournament title.

Friday night against Cincinnati junior midfielder Keegan Balle drilled a penalty kick for the second consecutive game to give the Braves a 1-0 advantage in the 81st minute.

But Bradley was not able to hold the lead as Cincinnati’s Shamar Shelton scored from outside the box just over a minute later to tie the game.

The contest went into extra time but neither team scored ending the game in a 1-1 draw. It was the third time in Bradley’s six games that extra time was needed.

The Braves outshot the Bearcats 16-15, but only managed six shots on goal despite consistent offensive pressure.

Coach Jim DeRose said some of the team’s struggles in close games may have something to do with the Braves’ having 11 newcomers and playing so many freshmen.

“With a young team, it’s all about closing out games,” he said. “Be it tie games to get the goal lead or not giving up a goal. If you play that game last year we probably get the win.”

In the second game of the weekend, Bradley finally had the offensive explosion they had been looking for all season.

The Braves improved their record to 3-1-2 on the year.

Graf got Bradley on the board first when he beat the Pilots’ keeper on a ball inside the right post in the 26th minute.

The lead was pushed to 2-0 when Balle scored on his third penalty kick in as many games. Balle’s three game goal streak matches the third longest streak in school history.

The Braves were able to connect on two more goals with one coming off a corner kick from junior Ross Williams in the 66th minute and the other from Graf on a breakaway in the 79th minute.

The Braves will compete in their third tournament of the year this weekend, traveling to Nashville, Tenn. to participate in the Belmont Bruins Classic. Bradley does not return home until Sept. 29 when they face Northern Kentucky.