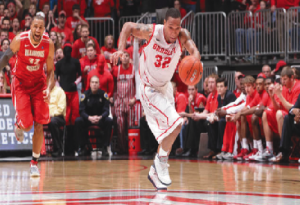 Bradley fell to 14-12 overall and 6-8 in the Missouri Valley Conference. They are in seventh place in the MVC.

The Braves struggled to play for a full 40 minutes. The team trailed Illinois State by just one at halftime Wednesday night then were outscored by 19 points in the second half, losing 79-59.

Senior Dyricus Simms-Edwards was sidelined for most of the second half with back spasms and scored no points. Junior Walt Lemon Jr. scored a team-high 15 points but on just 6-for-18 shooting.

The Redbirds’ big man Jackie Carmichael destroyed the Braves inside to the tune of 27 points and 13 rebounds.

It was the first half that haunted Bradley Sunday at Carver Arena against Northern Iowa. The Braves were outscored 37-18 and made valiant second half comeback but fell short 68-65.

“You can’t win a game in the first half, but you can lose one,” coach Geno Ford said. “I’m really proud of our guy’s effort and toughness in the second half. But it goes without saying you can’t ever play somebody and spot them 20 [points] at half.”

Simms-Edwards led the second half barrage that got Bradley back into the game. He scored 26 of his career-high 32 point in the second half. In a four minutes and 54 seconds stre

“It felt like [Dyricus] wasn’t going to let us lose,” Ford said. “He was willing us to get back in the game. He was fantastic offensively. He really shot it well and he was in an unbelievable groove.”

Simms-Edwards said he was happy with his performance, but it means nothing if the team doesn’t win.

“It’s a good feeling,” he said. “You kind of get into a rhythm and the goal seems bigger than it is. I was just trying to make plays and get us back into the game.”

In the two losses, the Bradley bench scored just 20 points with only five coming in the loss to Northern Iowa.

“We need a little firepower [coming off the bench], so that when guys are struggling we can get a little bit of infusion of performance,” Ford said. “Guys are trying. They’re working hard. They’re giving us what they can, but we definitely don’t have the ability to sub as much as we would like.”

The Braves will return to the court at 1 p.m. tomorrow afternoon at Carver Arena against Indiana State. Bradley will travel to Drake on Wednesday night in their third to last conference game of the season.