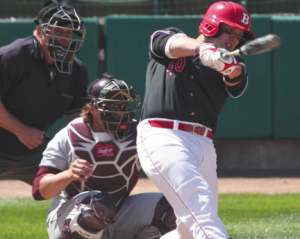 Bradley baseball coach Elvis Dominguez has a great deal of experience with the Missouri Valley Conference and recognizes the talent level Bradley faces.

“Our league is ranked fifth in the country so there’s no such thing as an easy weekend,” he said. “It’s very competitive.”

The Braves faced some of that competition in Indiana State this past weekend, losing two of three games with their lone win coming Saturday. They were in a precarious position going into the rubber match on Sunday, having played 11 innings in each of the prior matchups.

“We had two extra inning ballgames this past weekend,“ Dominguez said. “It was great to see [the Braves] keep bouncing back.”

The Braves did bounce back Saturday winning 5-4 over the Sycamores.

Despite losing the series, Bradley still had strong performances throughout the weekend.

Second baseman Chris Godinez collected three hits and two RBIs in the loss to Indiana State on Friday. Godinez said there is reason for hope among his teammates.

“We have a lot of potential as a team,” he said. “We are solid all around.”

Senior Joe Bircher pitched a solid seven innings Friday en route to setting the record for most strikeouts all time at Bradley with 264.

Yet sometimes, even with good performances the Braves seem to beat themselves.

“We’ve lot a couple ball games get away,” Dominguez said. “We’ve really played fundamentally sound baseball up to this point other than Sunday where we basically just got beat.”

Sunday was a tough loss for the Braves as starter Patrick Flanagan did not pitch through two innings.

“It was a rough outing,” Flanagan said. “I just didn’t have it that day. Hopefully my teammates can have confidence in me and I can come back out next Sunday.”

Flanagan said he will be ready to go this coming Sunday.

“I just make sure my arm is in good shape,” he said. “It feels pretty good because I didn’t throw many pitches on Sunday. I feel like I’m ready to go.”

The Braves may need to stop beating themselves before they win more consistently, but that does not mean Dominguez is not proud of the effort his players put in on a daily basis.

“I’m really proud of the way our guys have competed since day one,” he said. “They keep battling every game.”

Wins will be tougher to come by playing teams like Indiana State, who currently sit in 2nd place in the conference.

Still, if there was a doubt in anyone’s mind, Dominguez said he relishes the opportunity to play great teams.

“The only way you get better is by playing better competition,” he said.