Bradley pitcher makes name for himself 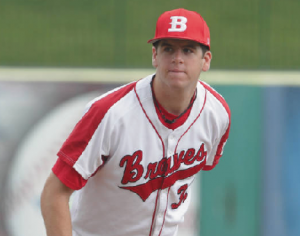 Bradley pitcher Joe Bircher may be the best athlete on campus, but you would never know it from talking to him.

The 6-foot-4-inch senior from Omaha, Neb. has a quiet confidence and, despite individual success, always puts the team and program first.

Bircher has been a well-known commodity in the Missouri Valley Conference, posting a sub four earned run average in his first three years on the Hilltop. He is the Bradley active leader in almost every pitching category including wins, ERA, starts, innings pitched and strikeouts.

But it wasn’t until his strong play this summer in the prestigious Cape Cod League that Bircher began to be noticed nationally.

The ten-team league attracts the best collegiate players from around the country. In 2010, 236 former Cape Cod League players were on MLB rosters.

This summer, Bircher didn’t just compete against the nation’s best, he thrived.

Bircher led the league in strikeouts with 48 and was second in ERA. He was rewarded with all-league honors.

“It’s obviously given me a whole lot of confidence to know I can go out there and succeed against a lot of the best hitters in the nation,” Bircher said. “I’m going to try to use what I learned this spring. It was just a great opportunity and one of the best summers of my life.”

Bircher’s strong play attracted the attention of College Baseball Daily who ranked him the No. 56 player in college baseball.

“It’s an honor [to be named one of the top 100 players in college baseball],” Bircher said. “There are some fantastic players on the list. It’s a great privilege to be mentioned in the same breath as those guys.”

Over the course of his career Bircher said he has grown mentally and physically. He credits pitching coach John Corbin and his teammates for pushing him to get better.

“I’ve gotten stronger in every aspect of my game,” he said. “I’ve been able to throw harder and do more things with my pitches. It’s been a real good environment for growing in every aspect, mental and physical.”

With the 2012 season beginning today, Bircher is focused on the team and turning Bradley into a winning program.

“We have a lot of senior leadership,” he said. “We have good older players as well as some younger talent. We could really make a splash and make a lot of noise in the conference. I think our goals for this season, just like any good team, is to win. Bottom line, we haven’t had a really great season since I’ve been here. It’s time. I’m really excited to see what we can do this year.”

Bircher is all but a lock to be drafted in June’s MLB draft. He has dreamed of playing professional baseball since the first day he began playing the game as a seven year old.

“Ever since I’ve picked up a baseball and you see the guys on TV, you want to be out there with those guys,” Bircher said. “God willing, there’s going to be an opportunity for me to play and if I’m that lucky I just consider it a great blessing.”

Despite tremendous success Bircher said he isn’t concerned with creating an individual legacy in his final year as a Brave. In the end, the only thing Bircher is concerned about is the team.

“I want to make this season a turn around year so we can become a winning program,” he said. “That’s what’s more important to me.”