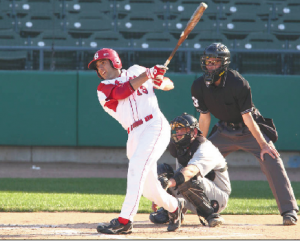 While only claiming one victory in three games over the weekend, the Bradley Braves baseball team has bounced back to win consecutive games. Tuesday night the Braves defeated Iowa 7-3 and beat Northern Illinois 4-3 Wednesday.

The Braves pitching staff gave up 25 total runs on Saturday and Sunday, but have only allowed six runs combined in their last two contests.

“I felt pretty good after Friday night,” coach Elvis Dominguez said. “We just did not pitch very well on Saturday or Sunday.”

Dominguez said he enjoyed seeing his team’s ability to put losses behind them quickly.

“It was great to see the way we came back yesterday against Iowa and today against Northern Illinois,” he said. “The resiliency of our ballclub is really impressive.”

One reason the Braves may be so good is their never give up attitude.

“Our guys have never been down, “ Dominguez said. “They feel like they’re never out of it. Today we got into the eighth inning down by a run, and it was like it was no big deal. They competed really well up at the plate. We were able to hit two home runs and we took the lead. This ballclub does not get down on themselves often.”

One Brave who has been hitting well lately is sophomore first baseman Greg Partyka.

Dominguez likes what he has seen from Partyka, noting he has the ability to carry a team during one of his hot streaks.

Dominguez commented on the lineup and how having Max Murphy, a freshman outfielder who leads the team in slugging and runs batted in, has benefited Partyka.

“They key is the guy that hits behind him, normally Max Murphy, who has been able to produce as well,” he said. “Greg has seen more pitches to hit and gives us a presence in the middle of the lineup that is tough for guys to pitch around.”

The baseball team has seen their share of tough losses on the schedule, so being able to move on quickly has been imperative for the Braves this season.

Dominguez believes baseball, more than other sports, requires  short-term memory to move onto the next at bat, or pitch or ball game.

“It’s just one game or one at bat and you’ve got to turn around and be just as good tomorrow,“ he said.

Touching on those struggles, Jason Leblebijian, one of the best all-around hitters on the team the last two seasons, has only managed a .250 batting average on the year. However, Leblebijian came through in a big way Wednesday evening against Northern Illinois, as himself and Bob Schuch each hit solo home runs in the eighth inning. He went three for four and had two RBIs to get out of his slump.

“I’m really happy for Jason,”  Dominguez said. “He’s a kid who had very high expectations for himself. He didn’t have a very good game offensively [Tuesday] night, but he bounced back today. I think that’s the sign of a great leader.”

Dominguez said he believes Leblebijian is consistently having quality at bats but the hits just don’t always fall. If they start to fall along with the continued production of players like Partyka and Murphy, there is no telling how far the Braves can go.