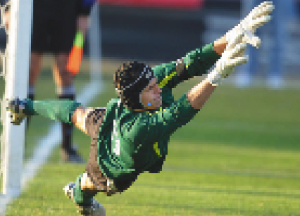 After an up and down start to the season, the Bradley soccer team earned a huge win Wednesday night at Shea Stadium upsetting No. 17 Northwestern 3-1in front of a crowd of nearly 500 people.

“I was really proud of [the team],” coach Jim DeRose said. “Going into the game with the injuries we’ve had we had to change some system stuff and move some guys around. I thought the guys with the short turn around put in the effort with film and studies and really did a nice job.”

The game was scoreless through much of the first half until Northwestern’s Henry Herrill snuck a shot past Bradley keeper Brian Billings off a long service in the 39th minute to give the Wildcats a 1-0 lead heading into halftime.

“Sometimes the best halftime speeches are the ones that aren’t,” DeRose said. “We’re down 1-0 [at halftime] and we just made a simple mistake at the end of the half. It’s not one of those where you’re raising your voice too much. They had done everything they needed to do. It was unfortunate that we had the one mistake that led to the goal.”

DeRose’s strategy paid off as Bradley struck right back in the second half. In the 50th minute, junior Ross Williams served a free kick from the right flank to the top of the penalty box. Freshman midfielder J.T. Kotowski received the pass and sent a one-timer past the Northwestern keeper for the first goal of his career.

“Once we got the first [goal] I think that gave us confidence and we were able to put the defending and attacking side together,” DeRose said.

The Braves didn’t waste anytime putting in the go ahead goal. In the 52nd minute, Williams found freshman forward Jason Lesch who passed ahead to junior forward Scott Davis for a run through the center of the penalty area. Davis collected the ball and beat the keeper to his right to give Bradley the 2-1 lead.

In the 63rd minute, Northwestern defender Nikko Boxall was given a red card for fouling on a breakaway giving the Braves a man advantage. But despite being a man down the Wildcats earned a penalty kick in the 65th minute.

Northwestern’s Chris Ritter took the kick, but Billings made a diving save to his right to preserve the 2-1 lead for the Braves.

“Brian did a good job.” DeRose said. “A lot of times on penalty kicks goal keepers sell out too early and the penalty kick taker will just say oh he went left and roll it right. Brian did a really good job of staying relaxed and reading it. Whether it’s soccer or hockey, having a great goal keeper gives you a chance in every game and Brian does that for us.”

Northwestern mounted a few more opportunities, but were not able to score. Williams ended the scoring for Bradley with a goal with just 30 seconds remaining after the Wildcats had pulled their keeper in desperation.

After the big win the Braves turn their attention to a road matchup tomorrow with defending Missouri Valley Conference champions Missouri State.

“It’s coach speak 101,” DeRose said. “It’s a great win [against Northwestern], but it doesn’t guarantee anything against Missouri State. It’s a very tough place to play. They don’t lose many games at home. But I think for us we’d be lying if we didn’t have some confidence going into it.”